OK, something this big can’t exactly be a secret but due to the fact it lies well out of the city centre, the vast expanse of Richmond Park in the city’s outer south-west, not far from the Thames, can get overlooked. 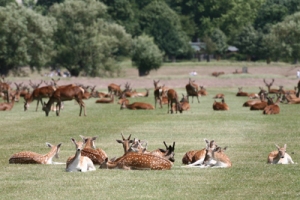 At almost 1,000 hectares, Richmond Park is the largest open space in the city and is home to some 650 Red and Fallow deer who roam about at will.

While the park’s royal connections go back to Edward I (1272-1307) when the area was known as the Manor of Sheen, a name which was changed to Richmond during the reign of Henry VII (1485-1509), it wasn’t until 1637 that Charles I decided to enclose the land with walls that remain to this day.

Deer aside, the park is also home to Pembroke Lodge which in 1847 became the home of then Prime Minister Lord John Russell (and is now a restaurant). The park’s features include King Henry’s Mound – which boasts great views on a clear day including that of St Paul’s Cathedral (12 miles away) – and the Isabella Plantation – an ornamental woodland garden.

WHERE: The park is located south of the Thames-side village of Richmond. Nearest tube is Richmond.  WHEN: 7am in summer to dusk; COST: Free to enter; WEBSITE: www.royalparks.org.uk/parks/richmond_park/