Following the wedding ceremony at Westminster Abbey on Friday, the now married happy couple will head in a carriage via a processional route down The Mall to Buckingham Palace. 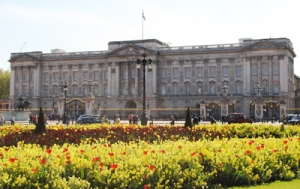 There, they will enjoy a champagne reception with 600 guests hosted by the Queen before, at 1.30pm, appearing on the balcony of the palace to wave to the crowds and watch an aircraft flypast expected to include a Lancaster, Spitfire, Hurricane, two Typhoons and two Tornados.

Buckingham Palace, which has served as the official London residence of the reigning monarch since 1837, has a long tradition of hosting royal events. Then much smaller and known as Buckingham House, the property was built for the Duke of Buckingham in 1705.

It passed into royal hands when it was bought by King George III in 1761 for his wife, Queen Charlotte, to use as a family home located conveniently close to St James’s Palace where many court functions were held.

The house was extensively remodelled in 1762 and again, this time on the orders of King George IV, in the 1820s (after initially wanting to use it, like his father, as a family home, the king decided after the works had started to instead transform it into a palace, created to the designs of architect John Nash).

When King George IV died in 1830, his brother King William IV ordered the works to be continued albeit with a new architect, Edward Blore (the spiralling costs of Nash’s work are said to have cost him the contract). The king himself never lived in the house – even offering at at one stage as a seat for Parliament after the Houses of Parliament were destroyed by fire in 1834 – and it wasn’t until the accession of Queen Victoria in 1837 that the palace became the sovereign’s official residence.

Further works were subsequently needed to ensure there was adequate accommodations for the Queen’s family and it was during these works that the monumental Marble Arch – designed as the centrepiece of the palace’s courtyard – was moved away to its present location on the north-eastern corner of Hyde Park.

The palace, which now boasts 775 rooms including 19 staterooms, has since been the site of numerous royal wedding receptions – it was on the balcony  where Queen Elizabeth II and Philip, the Duke of Edinburgh, greeted crowds on 20th November, 1947, after their wedding in Westminster Abbey and, similarly, where Prince William’s parents, Prince Charles and Princess Diana, held a reception before greeting crowds on 29th July, 1981, after their ceremony at St Paul’s Cathedral.

Buckingham Palace was also the location for Queen Victoria’s wedding breakfast following the ceremony in the Chapel Royal at St James’s Palace on 10th February, 1840.