The favoured place to dispatch pirates, Execution Dock was located on the north bank of the River Thames just off Wapping High Street. 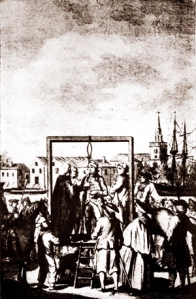 Among the most famous to be executed here was Kidd himself who, having been found to have turned pirate while operating as a privateer under the authority of King William III, was hanged here on 23rd May, 1701.

The site, near where a cannon foundry operated supplying the fleet of King Henry VIII, was in-use as an execution ground for more than 400 years, from the 15th century until the last hanging in 1830 (that of pirates George Davis and William Watts).

Those convicted of piracy in the High Court of Admiralty were typically brought to Execution Dock from Marshalsea Prison (or in some cases from Newgate) in a procession across London Bridge and past the Tower of London which was led by the Admiralty Marshal or his deputy who carried a silver oar as a symbol of their authority.

In a public spectacle, the pirates were then hanged on a wooden scaffold built at low tide but unlike at other sites of execution where they were cut down after death, the victims were left hanging to allow three tides to wash over them.

The most notorious of the pirates would then be tarred and put in a gibbet to be exhibited on one of the banks of the Thames as a warning to others (Kidd’s remains were apparently left in such a state for more than 20 years at Tilbury).

The exact location of Execution Dock remains a matter of dispute with favoured locations including a spot near the Town of Ramsgate pub, just along from The Captain Kidd pub near what are now known as King Henry’s Stairs and, between the two locations, a warehouse which stands on the waterfront and is prominently marked with an E (for Execution Dock). Some even suggest the site was outside the Prospect of Whitby pub further east along Wapping High Street.

There’s currently an exhibition on Captain Kidd at the Museum of London Docklands, Pirates: The Captain Kidd Story.  See here for more information.