First up, we’ve changed the name of the Thursday update of what’s happening in London to This Week in London which we think better describes what the column’s about. So, to some events we think you might be interested in…

• An exhibition that transports visitors to the heart of the Large Hadron Collider (LHC) opened at the Science Museum yesterday. In the first exhibition of its kind, Collider offers visitors the closest thing to actually being at the CERN particle physics laboratory, blending theatre, video and sound to enable visitors to explore the control room, meet virtual scientists and engineers and see inside a huge underground ‘detector’ cavern. There’s also the chance to follow the journey of particle beams as they race around the 27 kilometre long LHC tunnel (incidentally about the same length as the Circle Line) and the exhibition’s highlight is a wrap around projection which takes watchers from an enormous experiment cavern to the heart of a particle collision. On show will be artefacts from the actual LHC including a 15 metre magnet used to steer the particle beam and objects from the museum’s collection including the accelerator used by Cockcroft and Walton to split the atom in 1932. Admission charge applies. Runs until 6th March. For more, see www.sciencemuseum.org.uk.

• John Richard Arthur, a former Mayor of Battersea and the first black man to hold senior public office in London, was honoured with an English Heritage Blue Plaque this week. The plaque was unveiled by Cr Angela Graham, the Mayor of Wandsworth, at his former home at 55 Brynmaer Road in Battersea – his residence during the major milestones of his political career. Elected on 10th November 1913, Archer lived at the home from about 1898 to about 1918. He has been described as a “key figure in the story of the Black contribution in Britain in the early part of the Twentieth century”. For more, see www.english-heritage.org.uk/discover/blue-plaques/.

• Christmas comes to the West End this afternoon with the Carnaby Christmas Shopping Party taking place in 13 streets around the iconic fashion strip. More than 100 shops, restaurants and bars are delivering 20 per cent discounts and there’s also complimentary drinks, music, talks on fashion trends and the chance for the “best dressed” to win goodie bags. The party runs from 5pm to 9pm with the Christmas lights turned on at 6pm. Head to www.carnaby.co.uk for more. 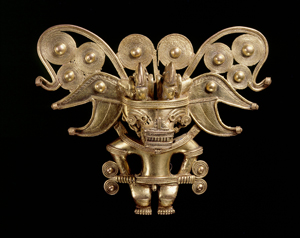 • On Now: Beyond El Dorado: power and gold in ancient Colombia. This exhibition in Room 35 of the British Museum features items including ceramics and stone necklaces taken from Lake Guatavita near modern Bogota (The phrase El Dorado, “the golden one”, actually refers to a ritual which took place at the lake in which a newly elected leader of the Muisca people was covered in powdered gold before diving into the lake and washing it off to emerge as the new leader). They are just some of the more than 300 items in the display which come from the Museo del Oro Bogata – one of the best collections of pre-Hispanic gold in the world – as well as the British Museum’s own collection. Other objects include large scale gold masks, a painted Muisca textile, avian pectorals and necklaces with feline claws and one of the few San Agustin stone sculptures held outside Colombia. The exhibition, sponsored by Julius Baer, runs until 23rd March. Admission charge applies. For more, see www.britishmuseum.org. PICTURE: Anthropomorphic bat pectoral, Tairona, gold alloy, AD900-1600. Copyright Museo del Oro, Banco de la Republica, Colombia.