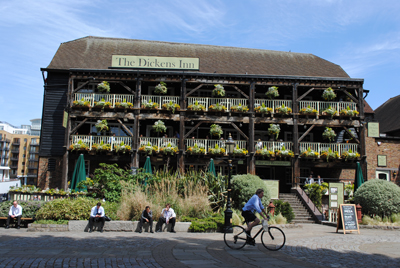 OK, the first thing to note here is that despite the name of this pub, located in St Katharine Docks, it has nothing to do with the famous 19th century novelist Charles Dickens. Well, not directly, at least.

That said, it still has an interesting history – dating back to at least the turn of the 19th century (although there is the suggestion it may be older), it is thought to have formerly been used as a brewery building or a tea warehouse and stood on a site about 70 metres east of its current location.

A brick ‘skin’ was built over the top of the timber building in the 1820s to bring it up to modern standards. It survived the Blitz but was slated to be demolished in the 1970s when the site was to be redeveloped.

But help was at hand and in 1976 the building was saved when it was painstakingly moved to its current site. The building was reconstructed to resemble what the inn’s owners called a “three storey balconied inn of the 18th century” (although there is something doubt whether such buildings ever existed like this in the 18th century).

Ah, and to Dickens. While the writer himself is not known to have visited the building, he did know the area well and its likely he would have frequently passed by it during his lifetime (in fact, when his grandson, Cedric Charles Dickens, formally opened the inn in May, 1976, he is quoted on the inn’s website as saying that: “My Great Grandfather would have loved this inn”.)

Spread over three levels with balconies on the upper two, the inn originally featured a sawdust covered floor and candlelit dining on the balconies. Both practices have since come to an end but the building does offer some great views of the dock and nowadays contains several different facilities including a tavern, pizzeria and restaurant called The Grill. There’s also a suite of function rooms.

Among the famous the establishment claims as visitors in more recent times are the late Joan Rivers and singer Katie Melua.

One thought on “London Pub Signs – The Dickens Inn…”