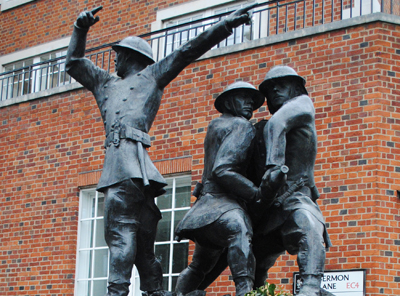 It was 75 years ago this year – on the night of 10th/11th May, 1941 – that the German Luftwaffe launched an unprecedented attacked on London, an event that has since become known as the ‘Longest Night’ (it’s also been referred to as ‘The Hardest Night’).

Air raid sirens echoed across the city as the first bombs fells at about 11pm and by the following morning, some 1,436 Londoners had been killed and more than that number injured while more than 11,000 houses had been destroyed along and landmark buildings including the Palace of Westminster (the Commons Chamber was entirely destroyed and the roof of Westminster Hall was set alight), Waterloo Station, the British Museum and the Old Bailey were, in some cases substantially, damaged.

The Royal Air Force Museum records that some 571 sorties were flown by German air crews over the course of the night and morning, dropping 711 tons of high explosive bombs and more than 86,000 incendiaries. The planes were helped in their mission – ordered in retaliation for RAF bombings of German cities – by the full moon reflecting off the river below.

Fighter Command sent some 326 aircraft into the fight that night, not all of them over London, and, according to the RAF Museum, the Luftwaffe officially lost 12 aircraft (although others put the figure at more than 30).

By the time the all-clear siren sounded just before 6am on 11th May, it was clear the raid – which turned out to be the last major raid of The Blitz – had been the most damaging ever undertaken upon the city.

Along with the landmarks mentioned above, other prominent buildings which suffered in the attack include Westminster Abbey, St Clement Danes (the official chapel of the Royal Air Force, it was rebuilt but still bears the scars of the attack), and the Queen’s Hall.

Pictured above is a statue of firefighters in action in London during the Blitz, taken from the National Firefighters Memorial near St Paul’s Cathedral – for more on that, see our earlier post here.