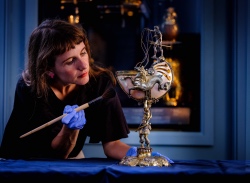 • The Ranger’s House in Greenwich – home to a world class art collection known as the Wernher Collection – reopened to the public this week after a makeover by English Heritage. The property – a Georgian villa located on the edge of Greenwich Park – displays the collection – which includes more than 700 works gathered by diamond magnate Julius Wernher in the late 1800s – across 11 period rooms. Highlights include a gold earring in the shape of Victory (the Greek goddess of war) which dates from 2BC, a carved pendant in the shape of a skull from around 1500, a silver gilt, steel and nautilus shell cup dating from 1660 (pictured) and an enamelled jug depicting the Greek god Triton. The collection was originally displayed at Wernher’s London townhouse – Bath House in Piccadilly – and at his country estate, Luton Hoo in Bedfordshire, but after Luton Hoo closed in the 1990s, English Heritage agreed to display the collection at the Ranger’s House (which it had acquired in 1986) on a 125 year loan. Photographs showing how Wernher displayed his collection in his own homes have informed how the objects are presented in the house today. The house is open from Sunday to Wednesday until the end of September. Admission charge applies. For more, see www.english-heritage.org.uk/rangershouse. PICTURE: © English Heritage

• The Great Pagoda at Kew has been reopened to visitors for the first time in years following a four year restoration project. Built in 1762, the pagoda was used by the Georgian Royal Family to entertain visitors and was for the first 20 years famously adorned with 80 brightly coloured wooden dragons (until, that is, they disappeared in the 1780s when they were rumoured to have been used as payment for the Prince Regent’s gambling debts). Thanks to a major restoration project by Historic Royal Palaces in conjunction with the Royal Botanic Gardens, Kew, dragons have returned to the structure and for the first time in decades visitors are being allowed access to the upper floors from where they can gain a birds-eye view of the gardens. They will also be able to learn about the role the pagoda played in planning for the D-Day landings and try out the automata on the ground floor for a tour in miniature of Kew’s Georgian ‘royal route’. Admission charge applies. For more, see www.hrp.org.uk.

• The art of Germany’s Weimar Republic goes on show at Tate Modern on South Bank from Monday. Magic Realism: Art in Weimar Germany 1919-1933 features about 70 paintings and works on paper drawn from The George Economou Collection – some of which have never seen in the UK before – and the Tate’s own collection. The display explores the “paradoxes” of the Weimar era, a time when liberalisation and anti-militarism flourished amid political and economic uncertainty (the title draws on the coining of the phrase ‘magic realism’ – today often associated with the literature of Latin America – by artist and critic Franz Roh in 1925 in an effort to describe the shift from the emotional art of the expressionist era, toward the unsettling imagery of this inter-war period). Works by artists like Otto Dix, George Grosz and Max Beckmann will be presented alongside those of under recognised artists such as Albert Birkle, Jeanne Mammen and Rudolf Schlichter and others whose careers were curtailed thanks to the rise of Nationalist Socialism and its agenda to promote art that celebrated its political ideologies. Admission is free. Runs until 14th July, 2019. For more, see www.tate.org.uk.

One thought on “This Week in London – The Ranger’s House reopens; dragons return to Kew; and the art of the Weimar Republic…”