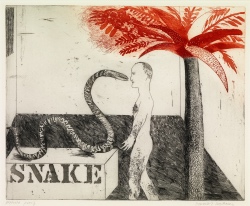 • Artworks by the likes of Pablo Picasso, Henri Matisse, Lucian Freud, Bridget Riley, David Hockney and Visa Celmins are on show in a new exhibition at the British Museum. Reflecting artistic developments in the past 100 years of modern art, Living with art: Picasso to Celmins features 30 prints and drawings. It showcases highlights from the wide-ranging collection of Alexander Walker (1930–2003), a longstanding film critic for London’s Evening Standard newspaper, which was bequeathed to the British Museum in 2004. The exhibition can be seen at the museum until 5th March before heading off on tour. Admission charge applies. For more, see www.britishmuseum.org. PICTURE: David Hockney (b. 1937), ‘Jungle Boy’ (1964) Etching and aquatint in black and red on mould-made paper © David Hockney Photo Credit: Richard Schmidt.

• Music festivals in Georgian Britain – from the Handel Commemoration of 1784 to the Crystal Palace concerts of the late 19th century – are explored in a new exhibition at the Foundling Museum in Bloomsbury. Music Festivals in Georgian Britain looks at the logistics behind the organisation of the concerts which followed on in the tradition of benefit concerts for charities as well as the expectations of audiences. Runs until 14th September. Admission charge applies. For more, see https://foundlingmuseum.org.uk.

• The “extraordinary story” of German band Tangerine Dream is told in a new exhibition opening at the City of London’s Barbican Music Library today. Tangerine Dream: Zeitraffer features photographs, previously unpublished articles, video clips, and original synthesizers as it tells the story of the band – credited with laying the foundation for the Ambient and Trance music styles – from its founding in 1967 and the release of its first album, Electronic Meditation, in 1970 through to the latest album, Recurring Dreams, last year. The band, which has released more than 160 albums, has also composed the scores for more than 60 Hollywood films including Michael Mann’s Risky Business and Ridley Scott’s Legend as well as Firestarter, based on the Stephen King novel. In 2013, they also wrote the score for the record-breaking video game, Grand Theft Auto V, and their music has appeared in recent Netflix series, Stranger Things, Black Mirror and Mr Robot. Runs until 2nd May. Admission is free.

• The stories of six “community curators” – each of whom has personal experience of migration – are at the centre of a new display at the Dulwich Picture Gallery. Journeys, which explores themes of identity, belonging, migration and London’s multiculturalism, examines the contemporary relevance of works by the likes of Poussin, Rubens, Canaletto and Van Dyck against the backdrop of the life stories of the curators who, aged between 29 and 69, have a combined heritage spanning eight countries including Yemen, Sri Lanka, Italy, Pakistan and Ireland. Opens next Tuesday (21st January) and runs until 24th June with a special free late opening on 19th June during the final week which coincides with Refugee Week. For more, see www.dulwichpicturegallery.org.uk.