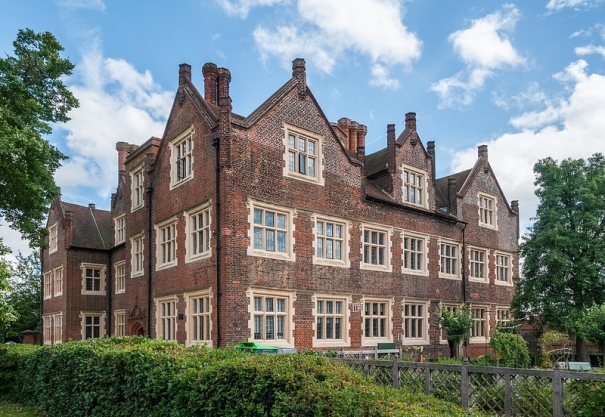 This month (12th January to be exact) marks 125 years since the National Trust was founded by Octavia Hill, Sir Robert Hunter and Canon Hardwicke Rawnsley. So we’re taking a quick look at another, somewhat related, milestone – the acquisition of the Trust’s first London property.

Located in Barking, Eastbury Manor House, initially known as Eastbury Hall, was built between 1560 and 1573 (during the reign of Queen Elizabeth I) for Clement Sisley on land which once belonged to Barking Abbey.

The H-shaped house and surrounding estate remained in the family until 1629 after which it passed through the hands of a number of well-to-do families, gradually falling into disrepair.

By the early 19th century, decay had led to one of the property’s unique octagonal stair turrets being pulled down and wooden flooring and fireplaces removed. The ground floor was being used as a stable and dairy.

The property struggled on into the early 20th century when it was threatened with demolition. The Society for the Protection of Ancient Buildings, recognising its significance as a rare example of mid-16th century brick built gentry house, lobbied for it to be saved and, working alongside the National Trust, ran a campaign to raise funds for its acquisition.

The house – and surrounding gardens – were acquired by the Trust for the nation in 1918 and then, in 1934, leased to Barking Borough Council. The following year the property became the home of Barking Museum.

It was awarded Grade I-listed status in 1954 and is now managed by the Borough of Barking and Dagenham. A restoration program in recent years has seen the addition of a permanent exhibition on the property’s history.