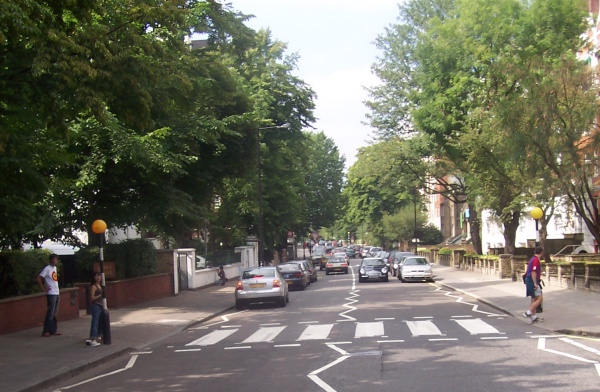 Famous for its Beatles connection (and a particular pedestrian crossing), Abbey Road in London’s north-west takes it name from, you guessed it, a former religious house.

Kilburn Priory was founded at what is now the road’s northern end under the auspices of Westminster Abbey in about 1130 AD. It was eventually dissolved on the orders of Henry VIII in 1537.

The religious house gave its name not only to Abbey Road but also the intersecting Priory Road and Priory Terrace, and nearby Abbot’s Place, to name a few.

Of course, Abbey Road is famous for being the location of EMI’s Recording Studios (later renamed the Abbey Road Studios, they are located at number three at the southern end in St John’s Wood) where the Beatles and many others, including Shirley Bassey, Yehudi Menuhin, Max Bygraves and Cliff Richard, recorded albums (it’s also been used for recording film scores including for Star Wars, Raiders of the Lost Ark, The Lord of the Rings trilogy and the Harry Potter films).

The Beatles named their last studio LP after the street and the album’s cover shows the four of them walking across the aforementioned famous zebra crossing just outside the studio. The crossing, which attracts a steady stream of tourists year round, was given Grade II-listed status in December 2010. The studios are also Grade II-listed.

Abbey Road was also the site of the founding of the Abbey National Building Society, now Santander UK, which was founded in a church here in 1874.

PICTURE: Looking northward up Abbey Road across the famous crossing (the studios are just beyond the crossing on the left) (WillMcC/licenced under CC BY-SA 3.0/image cropped)