We’ve touched on this story before but it’s worth a revisit as part of this series. London changed hands several times during the later half of the first millennium as the Anglo-Saxons fought Vikings for control of the city, meaning the city was the site of several battles during the period.

One of the most memorable (or so legend has it, there are some archaeologists who believe the incident never took place) was the battle in 1014 in which London Bridge – then a timber structure (today’s concrete bridge is pictured above) – was pulled down. A story attributed to the Viking skald or poet Ottarr the Black but not found in Anglo-Saxon sources, the event, if it did take place, did so against the backdrop of an ongoing conflict between the Danes and Anglo-Saxons.

Anglo-Saxon London had resisted several attempts at being taken by the Vikings – a fire was recorded in the city in 982, possibly caused by a Viking attack – and in 994, the Anglo-Saxon Chronicle reports that a fleet of 94 Danish and Norwegian ships were repelled with prejudice. Further attacks was driven back in 1009 and it wasn’t until 1013 that the city finally submitted to Danish rule after Sweyn Forkbeard had already claimed Oxford and Winchester.

But Sweyn, the father of the famous King Canute (Cnut), didn’t hold it long – he died on 3rd February the following year.

The deposed Anglo-Saxon King Æthelred II (also spent Ethelred, he was known as ‘the Unready’) – who had been forced to flee from London, which he used as his capital, to what is now Normandy thanks to Sweyn’s depredations – is said to have seized his chance and along with the forces of his ally, the Norwegian King Olaf II, he sailed up the Thames to London in a large flotilla.

The Danish had taken the city, occupying both the city proper and Southwark, and were determined to resist. According to the Viking account, they lined the timber bridge crossing the river and rained spears down on the would-be invaders. (The bridge, incidentally, had apparently been built following the attack in 993, ostensibly to block the river and prevent further incursions further upstream – there is certainly archaeological evidence that a bridge existed in about the year 1000).

Not to be beaten, Æthelred’s forces, using thatching stripped from the rooves of nearby houses to shield themselves, managed to get close enough to attach some cables to the bridge’s piers, pulling the bridge down and winning the battle, retaking the city.

There’s much speculation that the song London Bridge is Falling Down was inspired by the incident but it, like much of this story itself, remains just that – conjecture (although Ottarr’s skald does sound rather familiar).

The bridge was subsequently rebuilt and King Æthelred died only two years later, on 23rd April, 2016. The crown subsequently passed to his son Edmund Ironside but he too died after ruling for less than a year leaving Viking Canute to be crowned king.

Both Westminster Abbey and the Palace of Westminster (these days better known as the Houses of Parliament – pictured) pre-date 1215 but unlike today in 1215 the upon which they stood was known as Thorney Island.

Formed by two branches of the Tyburn River as they ran down to the River Thames, Thorney Island (a small, marshy island apparently named for the thorny plants which once grew there) filled the space between them and the Thames (and remained so until the Tyburn’s branches were covered over).

One branch entered the Thames in what is now Whitehall, just to the north of where Westminster Bridge; another apparently to the south of the abbey, along the route of what is now Great College Street. (Yet another branch apparently entered the river near Vauxhall Bridge).

The abbey’s origins go back to Saxon times when what was initially a small church – apparently named after St Peter – was built on the site. By 960AD it had become a Benedictine monastery and, lying west of what was then the Saxon city in Lundenwic, it become known as the “west minster” (St Paul’s, in the city, was known as “east minster”) and a royal church.

The origins of the Palace of Westminster don’t go back quite as far but it was the Dane King Canute, who ruled from 1016 to 1035, who was the first king to build a palace here. It apparently burnt down but was subsequently rebuilt by King Edward the Confessor as part of a grand new palace-abbey complex.

For it was King Edward, of course, who also built the first grand version of Westminster Abbey, a project he started soon after his accession in 1042. It was consecrated in 1065, a year before his death and he was buried there the following year (his bones still lie inside the shrine which was created during the reign of King Henry III when he was undertaking a major rebuild of the minster).

Old Palace Yard dates from Edward’s rebuild – it connected his palace with his new abbey – while New Palace Yard, which lies at the north end of Westminster Hall, was named ‘new’ when it was constructed with the hall by King William II (William Rufus) in the late 11th century.

Westminster gained an important boost in becoming the pre-eminent seat of government in the kingdom when King Henry II established a secondary treasury here (the main treasury had traditionally been in Winchester, the old capital in Saxon times) and established the law courts in Westminster Hall.

King John, meanwhile, followed his father in helping to establish London as the centre of government and moved the Exchequer here. He also followed the tradition, by then well-established, by being crowned in Westminster Abbey in 1199 and it was also in the abbey that he married his second wife, Isabella, daughter of Count of Angouleme, the following year.

This year we’re launching a new regular edition to Exploring London in which we take a brief look at a moment in the city’s long and colourful history. 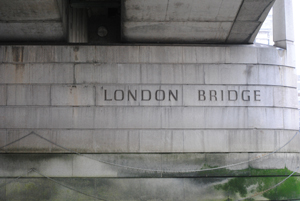 First up, we travel back exactly 1,000 years to 1014. The story – recorded in Viking Skaldic poetry but apparently not in Anglo-Saxon sources – goes that during the ongoing conflict between the Danes and Anglo-Saxons, the Danish had taken the city, occupying both the city proper and Southwark. At that stage, there was a timber bridge crossing the Thames.

Desperate to regain the city (the Viking ruler Sweyn died on 3rd February that year – this may have been why the attack was launched), the Anglo-Saxon King Æthelred (known to history as ‘the Unready’) and his Norwegian Viking allies apparently under King Olaf II sailed up the Thames in a large flotilla.

Despite meeting fierce resistance from the Danish occupiers – they lined the bridge and attacked the invasion force with spears – the attackers, apparently using thatching stripped from the rooves of nearby houses to shield themselves, managed to get close enough to attach cables to the bridge’s piers and then pull the bridge down.

There’s much speculation that the song London Bridge is falling down was inspired by the incident but it, like much of this story itself, remains just that – conjecture (but it’s still a nice story!)

The bridge was subsequently rebuilt and King Æthelred died only two years later, on 23rd April, 2016. The crown passed to his son Edmund Ironside but he too died after ruling for less than a year before the Viking Canute was crowned king.

PICTURE: Not the original London Bridge