• A sapphire and diamond coronet made for Queen Victoria goes on permanent display in the V&A’s William and Judith Bollinger Gallery from today. The new display is being unveiled as part of the V&A’s commemoration of the 200th anniversary of the births of the Queen and her husband, Prince Albert. The coronet was designed for the Queen by Prince Albert in 1840, the year they were married. Albert based the design on the Saxon Rautenkranz (circlet of rue) which runs diagonally across the coat of arms of Saxony. Victoria wore the coronet in a famous portrait by Franz Xavier Winterhalter completed in 1842 and again in 1866 when she wore it instead of her crown at the opening of Parliament. Entrance to the gallery is free. For more, see www.vam.ac.uk. 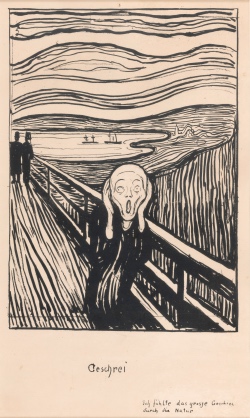 • A major new exhibition of the work of Edvard Munch (1863-1944) opens at the British Museum in Bloomsbury today. Edvard Munch: love and angst, a collaboration with Norway’s Munch Museum, features 83 artworks taken from the museum’s collection as well as loans from across the UK and Europe. Highlights include a black-and-white lithograph of The Scream – the first time any version of the work has been on show in the UK for a decade, Vampire II – considered to be one of his most elaborate and technically accomplished prints, the controversial erotic image Madonna, and, Head by Head, a print representing the complex relationship between human beings. All of the latter three latter prints are being displayed alongside their original matrix (the physical objects Munch used to transfer ink onto paper). Runs until 21st July in the Sir Joseph Hotung Exhibition Gallery. Admission charge applies. For more, see www.britishmuseum.org. (PICTURE: The Scream (1895), Edvard Munch (1863-1944), Private Collection, Norway. Photo: Thomas Widerberg)

• A retrospective of the work of Abram Games (1914-1996), a poster artist for the War Office during World War II, has opened at the National Army Museum in Chelsea. The Art of Persuasion: Wartime Posters By Abram Games features more than 100 posters he designed while working in the War Office’s Public Relations Department between 1941 and 1945. It explores how his Jewish refugee heritage, his experiences while a soldier and the turbulent politics of the time shaped his career and how his work – Games is described as a “master of reductive design” – still influences design professionals today. In conjunction with the opening of the exhibition last week, Games has been commemorated with an English Heritage Blue Plaque at his former home in Golders Green. Runs until 24th November. Admission charge applies. For more, see www.nam.ac.uk/artofpersuasion.