Long connected with the low end trade in words, Grub Street was once located on the site where the Barbican development now stands.

The street – its name possibly comes from a man called Grubbe or refers to a street infested with worms – was located in the parish of St Giles-without-Cripplegate outside the city wall. It northwards ran from Fore Street to Chiswell Street and had numerous alleys and courts leading off it.

Originally located in an area of open fields used for archery and so inhabited by bowyers and others associated with the production of bows and arrows, the relative cheapness of the land – due to its marshiness – later saw the Grub Street and its surrounds become something of a slum, an area of “poverty and vice”.

During the mid-17th century, it became known as a home for (often libellous or seditious) pamphleteers, journalists and publishers seeking to escape the attention of authorities.

And so began the association of Grub Street with writing “hacks”, paid line-by-line as they eked out a living in tawdry garrets (although how many actually worked in garrets remains a matter of debate). The word “hack”, incidentally, is derived from Hackney, and originally referred to a horse for hire but here came to refer to mediocre writers churning out copy for their daily bread rather than any sense of artistic merit.

Residents included Samuel Johnson (early in his career), who, in 1755 included a definition for it in his famous dictionary – “a street near Moorfields in London, much inhabited by writers of small histories, dictionaries and temporary poems, whence any mean production is called grubstreet”, and 16th century historian John Foxe, author of the famous Book of Martyrs.

The street, which was also referenced by the likes of Alexander Pope and Jonathan Swift as a symbol of lowbrow writing, was renamed Milton Street (apparently after a builder, not the poet) in 1830. Part of it still survives today but most of it disappeared when the Barbican complex was created between the 1960s and 1980s.

Formerly known as Strand Ait (or Ayt), this small island’s name was changed after the English Civil War, inspired by a story that Oliver Cromwell himself had taken refuge here during the war.

There’s apparently no truth to that story (or at least no evidence has been found) or to the legend that there was a secret tunnel which ran under the river from the mid-stream island to the nearby Bull’s Head pub on Strand-on-the-Green in Chiswick where Cromwell was said to have had established a headquarters (the tunnel was apparently so he could escape if the Cavaliers got too close).

The island, which stands in a stretch of the river between Kew and Chiswick (just upstream from Kew Railway Bridge and downstream from Kew Bridge) in London’s west, is not quite an acre in size (and, like Chiswick Ait, it’s roughly ship-shaped) but has served various purposes over the years.

In 1777, the City of London’s navigation committee built a wooden, castle-shaped tollbooth on the island with a barge moored alongside to catch passing river trade and so fund improvements to the navigability of the river. One story says it’s that barge that apparently lent its name to the delightful nearby pub, The City Barge, but others say the pub is named after the Lord Mayor of London’s State Barge which had winter moorings nearby for a time.

In 1865 a smithy was built on the island which was used in the building and repair of barges. It was later, after the Port of London Authority took over ownership in 1909, used as a storage facility and wharves for derelict vessels. The building survived until the 1990s but is now gone – along with any other signs of civilisation.

The island, which now has a dense canopy largely made up of sycamore trees, is these days inhabited by birds – those spotted there have included mallards, cormorants, Black-headed gulls, Canada geese, Egyptian geese, mute swans, magpies and robins – as well as  a range of other life – a 2014 survey found 11 species of mollusc and 35 species of vegetation and the island has also been cited as a habitat for bats and Thames door snails.

This prison dates from the time of King Richard II (1377-99) and stood off Borough High Street (just to the north of the Church of St George the Martyr) in Southwark until the mid 18th century when it moved to a new premises. 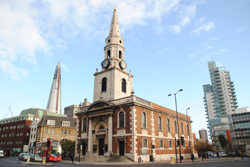 The prison, originally based in two houses apparently known as the Crane and the Angel (Angel Place bears witness to the latter), was first used for those convicted at the travelling court of the King’s Bench.

The prison was burned several times during periods of unrest and was upgraded during the reign of King Henry VIII. Among those imprisoned here were the reformer and martyr John Bradford who was held here before being burned at the stake in 1555 during the reign of Queen Mary (when it would have been known as the Queen’s Bench).

By the 1600s, it had become a debtors’ prison and in the mid-17th century – during the Commonwealth it was known as the ‘Upper Bench’ –  it reportedly held around 400 inmates who carried a collective debt of £900,000.

As with other prisons, the comfort of prisoners depended very much on their financial circumstances – those with money were able to live quite well. Those imprisoned here during this period included the dramatist Thomas Dekker and the King of Corsica, imprisoned in 1752 for debt (he died only four years later).

A Parliamentary inquiry in the 1750s revealed a host of problems with the prison including overcrowding, the practice of extortion by prison officers, promiscuity and drunkenness among prisoners and other irregularities, all of which led, in 1758, to the prison being closed (and later demolished) and moving to a new premises in St George’s Fields, Southwark (we’ll deal more with that facility in an upcoming post).

PICTURE: St George the Martyr on Borough High Street near where the first King’s Bench stood.