With the closures of properties around London thanks to the COVID-19 emergency, we’ll be highlighting some online exhibitions instead. Here’s a couple to get you started…

• Osterley House in Isleworth in London’s west was purchased by the Child banking family in 1713 who then set about transforming the property and filling it with treasures sourced from around the world. An exhibition, which was held at the house between November and February but which can now be viewed online, tells the story of the family who developed the banking business Child & Co during Britain’s Financial Revolution between 1660 and 1750. While the property, which is now looked after by the National Trust, is rightfully famous for the interiors Robert Adam created in the later 18th century, Treasures of Osterley: Rise of a Banking Family, features treasures from this earlier era. Among the items featured are a receipt for money signed by King Charles II’s mistress, Nell Gwynn, a lacquered screen from China decorated with the arms of the Child family (c1715-20), and the oil painting Saint Agatha by Carlo Dolci (1616–1687), which was purchased by Sir Robert Child. To view the exhibition (which was open to the public at the house between November and February), head to www.nationaltrustcollections.org.uk/exhibition/treasures-of-osterley. PICTURE: Maxwell Hamilton (licensed under CC BY 2.0)

• Visitors to the Summer Opening of the State Rooms at Buckingham Palace in 2018 were able to see a special display of artworks selected by the Prince of Wales to mark his 70th birthday. The exhibition, Prince and Patron, featured Prince Charles’ favourite works from both the Royal Collection and his private collection. They include a cedar wood pavilion created by classical Afghan-born carver Nasser Mansouri, a red felt cloak which, believed to have been worn by Napoleon, was seized from Napoleon’s baggage train at Waterloo following his defeat, and, various portraits of the Prince and other members of the Royal Family. The display can be viewed on the Google Arts and Culture website. 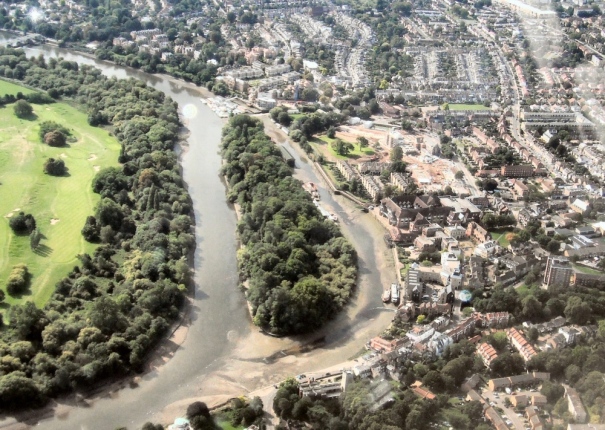 Another unpopulated ait (another word for river island), this nine acre isle is located in a stretch of the Thames with old Isleworth on one bank and the Kew towpath on the other.

The tidal island, which regularly floods, was once, like other arts in the Thames, used for the production of osiers, a type of willow used to make baskets to carry produce from Middlesex to London. There were once said to be five neighbouring islands, all of which have now disappeared.

Once the property of the Duke of Northumberland (it formed part Syon Park estate, his London property, which is located nearby), the island was purchased by the Metropolitan Water Board and is now owned by Thames Water.

Covered in trees, the ait provides a sanctuary for birds – including everything from kingfishers to swifts and herons – and rare snails like the two-lipped door snail. Officially declared a Local Nature Reserve, it has been under the management of the London Wildlife Trust since 1995.

The ait cannot be accessed without permission from the trust.

This weekend London is once again taking part in the Museums at Night event (yes, this is the first year it’s being held over two weekends – the first was back in May). In honour of that milestone, we thought we’d take the time to list five of the quirkier places that are taking part this time around, either tonight or on Halloween itself…

• The Marvellous Mysteries of Hackney Museum at Night. An interactive and “creative making” tour of the museum and local surroundings (be prepared for some walking!).

• The Monument, City. Ascend the spiral staircase of 360 degree views of the City and hear stories about the Great Fire and its aftermath and Hookes’ telescopic column.

• Osterley Park, Isleworth (pictured). Explore the Georgian house and discover some of the darker bits of Osterley’s 400-year-old history.

• The Fan Museum, Greenwich. Take a look at its latest exhibition ‘Made in China’ which features a display of 8o fans and “traces the evolution of Chinese export fan design from its emergence toward the end of the seventeenth century to its eventual decline in the latter part of the nineteenth century”.

• Severndroog Castle, Castle Wood. Take a candlelit tour on Halloween including the chance to take in the vistas from the viewing platform. The tearooms are also opening.

For details of all London events – some of which are free – check out www.museumsatnight.org.uk and search under ‘London’.