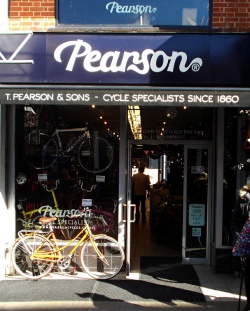 Thanks to Guinness World Records, Pearson Cycles in Sutton, south-west London, is officially not just London’s but the world’s oldest bicycle shop.

The premises was established by blacksmith Tom Pearson in about 1860 (when Sutton was still a town in Surrey and not at that stage part of London) and he soon found his skills put to use in working on bicycles.

In 1889, Tom was succeeded by his son Harry who moved full-time into the manufacture of bicycles with the Endeavour the first model.

The shop, at 126 High Street in Sutton, is now run by a fifth generation of the family, Guy and Will Pearson. The company also has a shop in East Sheen.