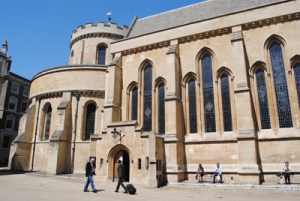 Located just outside the west end of the medieval city walls, the Temple Church is an anomaly in a city where, thanks to the Great Fire of 1666, few medieval churches remain.

First consecrated in 1185, the church – like all Templar churches – features a round nave – known as the Round Church – modelled on that of the Holy Sepulchre in Jerusalem. It adjoins a ‘Hall Church’ which features three bays dating from the 13th century.

While they have been moved several times, the Round Church contains a number of tomb effigies including those believed to be that of William Marshall, 1st Earl of Pembroke and one of the towering figures of the 12th and early 13th centuries.

It also features a series of faces around the outer wall (these were renewed and replaced in the 1820s), each of which shows a different and, at times, plain odd expression.

The church is located in the midst of what was once a large landholding – located between Fleet Street and the Thames – once owned by the Templar Knights which included quarters for the knights and serjeants. Following the disbanding of the order in early 1300s, the Temple Church passed into the hands of the Knights Hospitaller and then became the property of the Crown during the 16th century reformation. 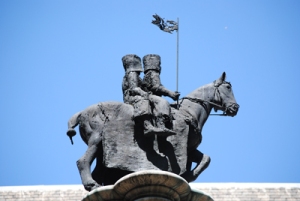 In 1608, James I granted all the Templar’s land to the societies of the Inner and Middle Temple, two of London’s Inns of Court – the inns are still dedicated to housing those studying and practising law and it’s the inns which maintain the church today.

One of the most famous figures connected to the church is Richard Hooker, Master of the Temple between 1585-91, and author of Of The Laws of Ecclesiastical Polity, an important document in Anglican theological thought.

Christopher Wren also left his mark here – he refurbished the church’s interior in the 1670s although much of work was later removed – as did World War II – the roof of the Round Church was brought down during the Blitz.

Make sure you pop in for one of the free organ recitals which are held over lunchtimes each Wednesday.

WHERE: Off Fleet Street and down Inner Temple Lane (nearest tube station is Temple); WHEN: Check website for times; COST: £4 (free to under 18s and seniors); WEBSITE: www.templechurch.com