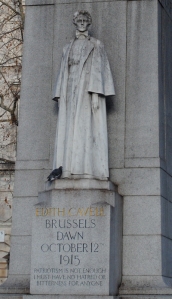 Prominently located on Charing Cross Road near Trafalgar Square, this memorial is a war memorial with a difference. Rather than commemorating armies or great war leaders, its subject is Edith Cavell, a British nurse who was executed by a German firing squad during World War I.

Cavell, originally from Norfolk, was working at a medical institute in Brussels when the German army invaded in 1914. The institute become a Red Cross hospital and Cavell continued caring for injured soldiers regardless of their nationality until, on 5th August, 1915, she was arrested on charges of treason for helping as many as 200 British and French soldiers escape to neutral Holland.

Held for a time in solitary confinement, she was tried at a court martial after signing a confession. Cavell was sentenced to death, and on, 12th October, was shot dead at the age of 49 – an event that sparked worldwide headlines and prompted an international outcry. She subsequently featured prominently in propaganda designed to boost British recruitment.

The 1920 memorial, designed by Sir George Frampton, features comments Cavell made to an English Anglican chaplain with her on the night before her death: “Patriotism is not enough. I must have no hatred or bitterness for anyone”.

Cavell was buried next to the prison where she had been held before her body was later exhumed before being reburied in Norwich Cathedral.