It’s now one of the most popular statues in London – the diminuative “boy who wouldn’t grow up”. But few people today are aware of its somewhat unusual origins. 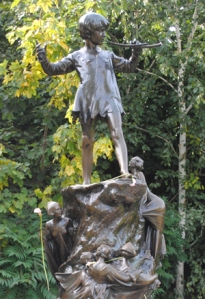 Located about half-way along the western shore of the Long Water in Kensington Gardens, the bronze statue first “appeared” in the park in 1912. The story goes that author JM Barrie, who published his first story about Peter Pan – The Little White Bird – in 1902, chose the location of the statue based on it being the place where, in the story, Peter Pan landed after flying out of the nursery window of his home.

Peter Pan first appeared on stage two years later in 1904 in the play Peter Pan, or The Boy Who Wouldn’t Grow Up, and this was later expanded into a novel by Barrie, Peter and Wendy. He’s since appeared in numerous film and stage adaptations – including sequels and prequels to the original tales.

Barrie had apparently been thinking about the statue for some time prior to its appearance – in 1906 he went so far as to take a series of photographs of six-year-old  Michael Llewelyn Davies wearing a Peter Pan costume (it was Barrie’s relationship with the Llewelyn Davies family which is said to have inspired Peter Pan’s creation).

Six years later Barrie commissioned Sir George Frampton to create the statue – interestingly, in what was a cause of some friction between the artist and patron, Sir George modelled his figure not on Llewelyn Davies but on another boy. Peter is seen playing on some pipes and is surrounded by small animals and fairies. There’s no sign of Captain Hook.

On the 1st of May, the statue simply appeared in its current position after being taken into the park under the cover of darkness. Barrie announced what he called his “May Day gift” to the children of London in The Times newspaper, describing it as “delightfully conceived”.

There was apparently some initially concerns raised among MPs about the appropriateness of an author erecting a statue to promote his own work but it has since become an iconic symbol of the gardens (and undergone some repairs – including after an incident in 1952 when Peter’s pipes were stolen).

So popular has the statue proved, that copies of the Peter Pan statue – created using Sir George’s mould – can now be found in Liverpool as well as in countries including Canada, Brussels, Australia and the US. There are others (not copies) in Kirriemuir, Scotland (Barrie’s birthplace) and another of him with Tinkerbell outside Great Ormond Street Hospital for Children (which holds the copyright to the character).