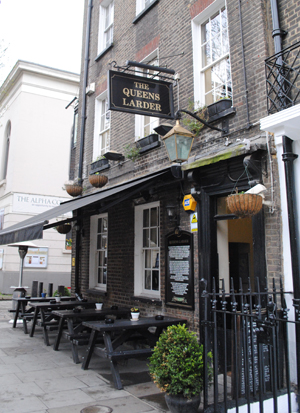 In the first of an occasional series looking at the story behind some of London’s pub signs, we take a look at The Queen’s Larder in Queen Square, Bloomsbury.

The origins of the pub go back to the early 18th century – around 1710 – when there was known to be an alehouse on the site now occupied by the tavern. The story goes that as King George III (aka the ‘Mad King George’ depicted in the film of the same name) began to be affected by mental illness he was brought to a house in Queen Square where he stayed and was treated by a Dr Willis.

While he was undergoing this treatment – which was apparently initially successful, his wife Queen Charlotte rented an underground cellar below the alehouse and there stored some of the king’s favorite delicacies.

When a tavern was later built on the site, it was named The Queen’s Larder in honor of the role it had played in providing a storehouse for his treats.

The square itself contains a statue which was believed to be of Queen Anne – after whom the square was renamed (it had previously been known as Devonshire Square) – but it is now thought that the statue may in fact be of Queen Charlotte.

One thought on “London Pub Signs – The Queen’s Larder”