The fourth in a line of parks stretching from Kensington Palace to Westminster, St James’s Park largely owes its foundation to King James I. 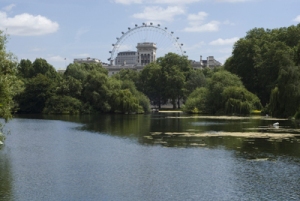 Given its early history is covered in our earlier post, we’ll skip forward to the time of King Charles II when, under to instruction of Frenchman Andre Mollet, the park was redesigned with new landscaping including wide lawns, avenues of trees and a wide, centrally positioned canal. It was King Charles II who also opened the park up to the public (he even mingled with them there along with his mistress Nell Gwynn). Interestingly the first pelicans were also introduced to the park around this time when the Russian ambassador presented a pair of pelicans to the king.

In the 18th century, Horse Guards Parade was added to the park by filling in one end of the park’s canal and was later used for parades. The ceremonies of Beating Retreat and Trooping the Colour are still held there today.

The next major changes came in the 19th century when in 1827-28, architect John Nash oversaw a more romantically inspired renovation, including the transformation of the canal into a natural looking lake and the addition of winding paths, as part of his grand scheme which still shapes much of London today.

It was also at this time that The Mall (which like Pall Mall takes it name from the game of Pelle Melle – see our earlier post) was transformed into a grand processional route (it was opened to traffic later, in 1887). The park, bounded to the west by Buckingham Palace, also takes in the Queen Victoria Memorial – completed in 1914 to replace the Marble Arch which was moved to its current location at the corner of Oxford Street and Park Lane in 1851 – and flower beds which are planted annually with 12,000 geraniums, the color of which is chosen to match the guardsmen’s tunics.

Meanwhile, in 1837, the Ornothological Society of London erected a cottage for the birdkeeper (the thatched cottage can still be seen there today and the post of birdkeeper still exists). The first bridge was placed across the lake in 1851 (and replaced in 1951 with the one that now stands there).

Little has changed in the 23 hectare (58 acre) park since Nash’s day. Newer facilities include a restaurant and a playground at the western end.