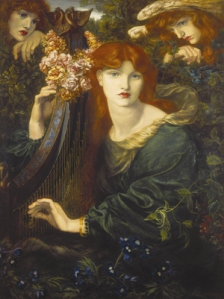 A sensual and vivid masterpiece, Dante Gabriel Rossetti’s La Ghirlandata, hangs in the main hall of the Guildhall Art Gallery at the heart of the city.

The portrait, which is alive with the imagery of sexual attraction including honeysuckle and roses around the top of the harp and the harp itself – representing music, a common metaphor for love, was one of several depicting women playing musical instruments painted by Rossetti in the early 1870s.

It was painted in oils in 1873 at Kelmscott Manor in Gloucestershire, a property part-owned by Rossetti and his friend William Morris. There Rossetti, a founder of the Pre-Raphelite Brotherhood, had come after having what has been described as a mental breakdown in 1872.

Morris was not at the property when the painting was made but his wife Jane, with whom Rossetti was in love and who was one of his key muses, was. The model, however, was Alexa Wilding while the angels bore the face of Jane’s young daughter May.

WHERE: Guildhall Art Gallery, Guildhall Yard (off Gresham Street) (nearest Tube stations are Bank, Mansion House, Moorgate and St Paul’s); WHEN: 10am to 5pm Monday to Saturday/12pm to 4pm Sunday (excluding some public holidays); COST: Free (fees may be charged for some temporary exhibitions); WEBSITE: www.guildhallartgallery.cityoflondon.gov.uk/gag/

One thought on “Treasures of London – La Ghirlandata”