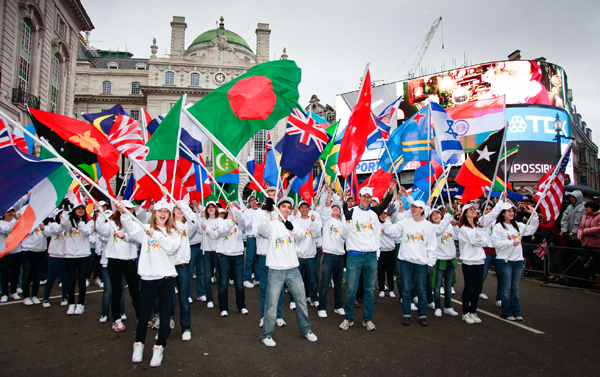 More than 8,500 performers – including those pictured celebrating the launch of London’s Olympic year – took part in this year’s New Year’s Day Parade in London, the wettest in the event’s 26 year history. But the wild weather didn’t put off the more than 500,000 people who turned out to watch the parade as it made its way from the starting point outside the Ritz Hotel in Piccadilly via Trafalgar Square to Parliament Square. As many as 19 London boroughs submitted entries in a competition based on the themes of the Olympics and the Queen’s Diamond Jubilee with Merton (its entry ‘From Horsepower To High Speed Rail’ featured animatronics) and the City of Westminster (its entry ‘Peter Pan’ involved a giant galleon and the The Sylvia Young Theatre School) announced as joint winners. For more on the parade, see www.londonparade.co.uk.