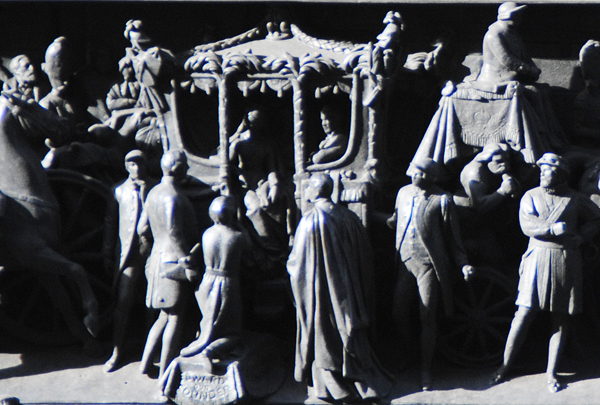 The latest in the series in which we ask you to identify where in London this picture was taken and, importantly in this case, what it’s of. If you think you can identify this picture, leave a comment below. We’ll reveal the answer early next week. Good luck!

Well done to Jameson Tucker, this is indeed a relief on the Temple Bar Memorial, which stands where the Strand turns into Fleet Street. It depicts Queen Victoria on a royal progress to the Guildhall in 1837, a few months after her accession, when she was met at this spot by the Lord Mayor and Aldermen and presented with the sword of state and keys to the city.

According to a tradition said to date back to 1215, the Temple Bar is the only place where the monarch may enter London after first seeking permission from the Lord Mayor and being presented with the City’s Pearl Sword (one of five City swords, this is said to have been first given to the City by Queen Elizabeth I).

The monument itself was designed by Sir Horace Jones and erected in 1880 to mark the location where the Temple Bar – the ceremonial entrance to the City of London – originally stood (the last incarnation of the Temple Bar, designed by Sir Christopher Wren, is now located near in Paternoster Square near St Paul’s – see our earlier post for more on Wren’s Temple Bar).

On top of the granite and bronze monument stands a rearing griffin (actually it’s supposed to be a dragon), one of the city’s official boundary markers, sculpted by Charles Birch while on either side are bronze statues, by Sir Joseph Edgar Boehm, of Queen Victoria and Edward, Prince of Wales (later King Edward VII), who in 1872 were the last of the Royal family to pass through the Temple Bar gateway before its demolition in 1878 (they were on their way to St Paul’s to attend a thanksgiving service following the prince’s recovery from typhoid).