Wimbledon kicked off this week, so it’s only fitting that we mention the recent unveiling of a plaque commemorating the first ever Wimbledon Championships, held in 1877.

The plaque was unveiled last Monday on the former site of the All England Lawn Tennis and Croquet Club just off Worple Road in Wimbledon. As well as the first championships, it also commemorates use of the site for the 1908 Olympics tennis event. 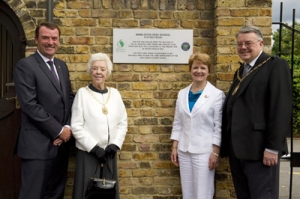 The location of the former club, which it occupied until 1922, is now used as playing field by Wimbledon High School. The club is now based in Church Road opposite Wimbledon Park.

PICTURES: Top – The Championships being played at the former location in Worple Road (© Wimbledon Lawn Tennis Museum); and, at the plaque’s unveiling featuring the chairman of the All England Lawn Tennis and Croquet Club, Philip Brook, Wimbledon High School headmistress, Heather Hanbury, and the Mayor of Merton, Cr David Williams  (© AELTC/Thomas Lovelock).