Regular watchers of London’s Lord Mayor’s Show parade will be familiar with the two giants Gog and Magog who for centuries have been an integral part of the procession. But just who are the two stern figures who strike fear into the hearts of all they pass (well, perhaps not so much the fear)? 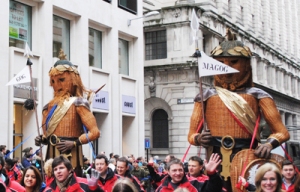 While the names Gog and Magog appear several times in different contexts in the Bible came t0 epitomise the enemies of God, legend has it that the Gog and Magog seen in this context were leaders of a race of giants who inhabited Britain in times of prehistory.

Defeated by Brutus, a descendent of the Trojan Aeneas and the founder of London and first king of Britain, they were then chained to the gate of his palace which stood on the site of where Guildhall – home of the City of London Corporation – now stands.

Seen as guardians of the City of London, figures of the giants have been carried in the Lord Mayor’s Show – the annual procession surrounding the election of the new Lord Mayor – since as far back as the reign of King Henry V (originally made of ‘wickerwork and pasteboard’, they were later replaced with wooden ones).

The seven foot high wicker versions of the giants which are now carried in the parade were donated by the Worshipful Company of Basketweavers in 2006 (pictured here in the 2010 parade) and are the just latest in a series of effigies and statues of the two giants which have been associated with Guildhall.

These include pair of nine foot high limewood statues of the giants which currently stand in Guildhall – carved in 1953 by David Evans, they replaced two earlier, 14 foot high oak versions made by Richard Saunders in the early 1700s which were destroyed in the Blitz during World War II. They, in turn, were created to replace earlier papier mache versions.

As well as being found in numerous cities around the world, figures of the two giants also famously feature as the clock’s bell ringers on the facade of the Church of St Dunstan-in-the-West in Fleet Street. The clock, incidentally, was the first public clock in London to have a minute hand.

One thought on “Famous Londoners – Gog and Magog…”