This central London thoroughfare runs through the heart of the City of London and has been a main thoroughfare since Roman times. 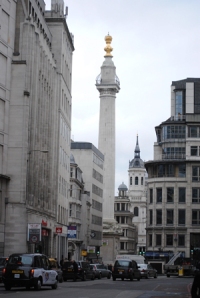 Stretching from Eastcheap (near the Monument) to Leadenhall Street, the street runs over the site of what was Roman London’s forum and basilica (see our earlier post on the Roman buildings here).

The name, meanwhile, comes from the former medieval church of St Benet Gracechurch which was once located on the corner of Gracechurch and Fenchurch Streets.

The church, which was destroyed in the Great Fire of 1666 but rebuilt by Sir Christopher Wren before finally being demolished in 1876, was named for St Benedict (St Benet is a short form) while Gracechurch – which was used after the Great Fire – was a corruption of Grasschurch, a reference to it being located near a hay market (in fact, the church was also known as St Benet Grass). The street was also known as Gracious Street.

Landmarks along Gracechurch Street including the Leadenhall Market (see our earlier post here) and a 30s-inspired modern building of note which stands at number 20.

PICTURE: Looking down Gracechurch Street toward the Monument.