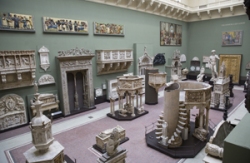 • The V&A’s spectacular Italian Cast Court will reopen on Saturday after the completion of the first phase in the museum’s programme of renovating its day-lit courts. The Italian court, which has been renamed the Weston Cast Court, features more than 60  19th century reproductions of Italian Renaissance monuments including a five metre high cast of Michelangelo’s David, a cast of the massive Gates of Paradise from Florence Cathedral, a plaster cast of a pulpit from Pisa Cathedral and a monumental cast of Jacopo della Quercia’s great arch from the Basilica of San Petronio in Bologna. The displays have been reconfigured with a new interpretation following extensive examination and preservation of the collection during the gallery’s renovation. The two cast courts at the South Kensington-based museum first opened in 1873. Entry is free. For more, see www.vam.ac.uk. PICTURE: © Victoria and Albert Museum.

• The annual ‘Christmas Past’ exhibition – in which 11 period rooms have been decorated in period style for the Christmas season – opened at the Geffrye Museum in Shoreditch this week. Along with the chance to see how Christmas looked in bygone years, there’s a series of Christmas-themed events including “A Georgian Christmas” on 4th December, “festive food” in the cafe and Christmas gifts to stuff your stocking with.  Entry to the museum is free. Christmas Past runs until 4th January. For more, see www.geffrye-museum.org.uk.

• We’ve mentioned it already but London’s public New Year’s Eve celebration – featuring its spectacular fireworks and lighting display – will this year be a ticketed event and the final tickets will be released during the first couple of weeks in December. A batch of new tickets will be released at noon each day from the 1st to 15th December. Those wishing to snag a ticket – and you can book up to four with a £10 administration fee payable for each – need to head to www.london.gov.uk/nye. Meanwhile the city is gearing up for Christmas and, in the wake of the Christmas lights getting turned on all across the metropolis, comes the annual lighting of the Christmas Tree in Trafalgar Square. The tree – a gift from the citizens of Oslo as a token of London’s support for them during World War II – takes place next Thursday (4th December) at 6pm (more on further Christmas events next week).

Apologies that the headline originally had a mis-spelling of the Geffrye Museum (auto-correct run amok!)