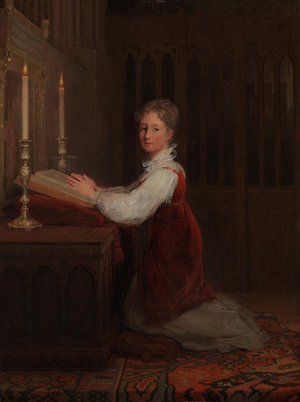 Thought to be lost for more than 140 years, a painting by Scottish artist Sir David Wilkie went on display at the National Gallery off Trafalgar Square last month. A Young Woman Kneeling at a Prayer Desk was discovered in the US having previously been last heard of in 1872 when it was sold by a relative of the 1st Earl of Mulgrave, Henry Phipps, whose daughter, Lady Augusta Phipps, was thought to be the subject of the painting which dates from 1813 (she died that year at the age of just 12). While the work was known to exist thanks to it having featured in an oil sketch the artist had sent to his brother – an army officer in India, it was only recently rediscovered when spotted by London-based art dealer Ben Elwes in a catalogue advertising its sale in New York. The National Gallery says it was only able to purchase the painting thanks to late Birmingham art teacher Marcia Lay, who left a bequest to the gallery. The painting is displayed alongside masterpieces by the likes of Turner, Constable, Gainsborough and Reynolds in Room 34. For more, see www.nationalgallery.org.uk. PICTURE: David Wilkie, A Young Woman Kneeling at a Prayer Desk, 1813, © National Gallery, London.