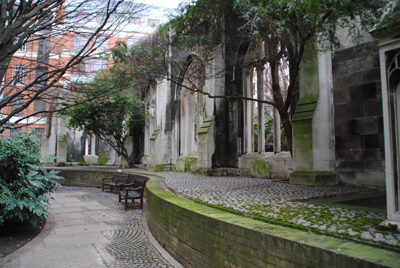 Located amid the remains of the medieval church of St Dunstan in the East, the garden was created in the late 1960s after the church was finally – and irrevocably, apparently – destroyed in the Blitz of World War II.

The church’s origins went back to around 1100 and it was subsequently extended with a new south aisle in the late 14th century and repaired in the early 17th century before being severely damaged in the Great Fire of 1666.

Patched up, with a new steeple and tower added to the building between 1695-1701 by Sir Christopher Wren, the building stood until the early 19th century when much of the church – with the exception of Wren’s additions – had to be rebuilt (for more on the history of the church, see our earlier Lost London post here).

The ‘new’ building was, however, badly damaged during bombing in 1941 and it was decided not to rebuild the church in the aftermath of the war.

The City of London opened a garden, sympathetic with the remains of the Grade I-listed building, on the site in 1971 (although Wren’s tower remains). They won a landscape award only a few years later.

Features in these atmospheric gardens – which seem to capture the essence of the Romantic idea of what ruins should look like – include a fountain which sits in the middle of the nave. In 2010 it was one of five public gardens in the City where award-winning  ‘insect hotels’ were installed.

Maintenance works were carried out in 2015 and new plantings put in (the picture, above, was taken before this).

WHERE: St Dunstan in the East, between Idol Lane and St Dunstan’s Hill, City of London (nearest Tube stations are Monument and Tower Hill); WHEN: 8am to 7pm or dusk (whichever is earlier); COST: Free; WEBSITE: www.cityoflondon.gov.uk/things-to-do/green-spaces/city-gardens/visitor-information/Pages/St-Dunstan-in-the-East.aspx

One thought on “10 small, ‘secret’ and historic gardens in central London…3. St Dunstan in the East Garden…”