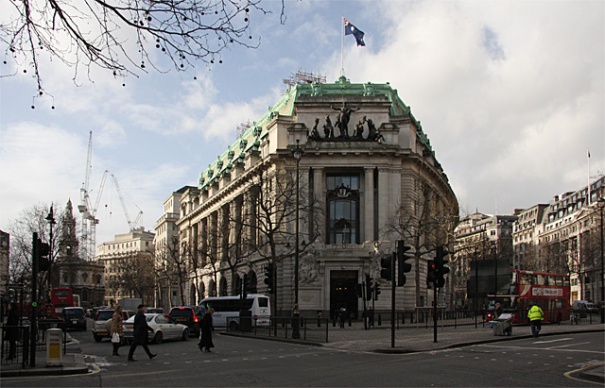 News this week that scientists have confirmed an ancient sacred well beneath Australia House in the Strand (on the corner of Aldwych) contains water fit to drink. The well, believed to be one of 20 covered wells in London, is thought to be at least 900 years old and contains water which is said to come from the now-subterranean Fleet River. Australia’s ABC news was recently granted special access to the well hidden beneath a manhole cover in the building’s basement and obtained some water which was tested and found to be fit for drinking. It’s been suggested that the first known mention of the well – known simply as Holywell (it gave its name to a nearby street now lost) – may date back to the late 12th century when a monk, William FitzStephen, commented about the well’s “particular reputation” and the crowds that visited it (although is possible his comments apply to another London well). Australia House itself, home to the Australian High Commission, was officially opened in 1918 by King George V, five years after he laid the foundation stone. The Prime Minister of Australia, WM “Billy” Hughes, was among those present at the ceremony. The interior of the building has featured in the Harry Potter movies as Gringott’s Bank. PICTURE: © Martin Addison/Geograph.