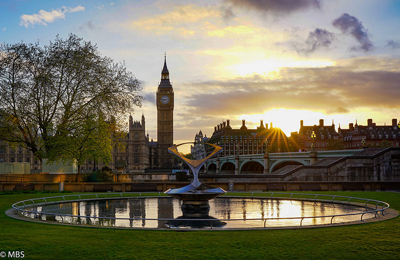 Taken by Murray, this picture captures some of the city’s iconic attractions as it looks across the River Thames to Elizabeth Tower (formerly known as the Clock Tower) at the northern end of the Houses of Parliament just as the sun is setting. Westminster Bridge can be seen to the right while pictured in the foreground, in the middle of a garden located at St Thomas’ Hospital, is the Grade II*-listed sculpture/fountain, Revolving Torsion, which is the work of Russian-born artist Naum Gabo and has been on long-term loan to the hospital since the mid-1970s. Says the photographer: “Funnily enough, I shot this picture handheld and spontaneously as I though I might miss the shot. I then tried to take better ones with a tripod etc – but I think this was my best effort. Spontaneous pictures are always the best…I used to work in St Thomas’ which is behind me in the picture and looked out at this view constantly during the daytime.” PICTURE: Murray/www.flickr.com/photos/muffyc30/.