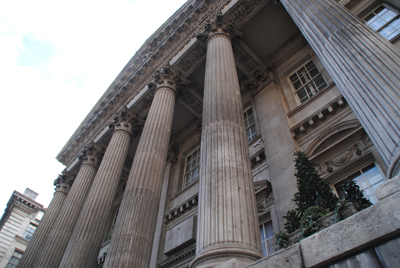 Mansion House, perhaps best known as a tautological-sounding Tube station, is actually the name of the official residence of the Lord Mayor of London (a suitable subject, we felt, given the upcoming Lord Mayor’s Show in November).

Designed by George Dance the Elder and built between 1739 to 1753 (many years after the idea of an official residence for the Lord Mayor was proposed in the aftermath of the Great Fire of London), the Palladian-style property – located a stone’s throw from the Royal Exchange and the Bank of England on a short stretch of street named after the property – has been the home of the Lord Mayor since the latter date.

It was built on the site of what was known as the Stocks Market (it had previously been the location of some stocks – used to punish people for various misdemeanours), the name isn’t actually as repetitive as it looks but actually means “official residence” and was previously used to designate homes which went with particular ecclesiastical jobs.

As well as accommodation for the Lord Mayor, the interior of the Grade I-listed property features two halls known as the Egyptian Hall and what was initially known as the Dancing Gallery but is now the Ballroom (we’ll be taking a more in-depth look at the property at a later date).

The Tube station opened in 1871 as the eastern terminus of the Metropolitan District Railway. Interestingly, Bank station is actually closer to the property with Mansion House station located to the south-west down Queen Victoria Street.

2 thoughts on “What’s in a name?…Mansion House”