The Lord Mayor’s Show will be held on 12th November so we thought in the lead-up to it, we’d look briefly at the lives of five of the notable Lord Mayors of London during the 801 years of the institution…

• William Hardel: Mayor of London (the title Lord didn’t come until a century later) in 1215, Hardel was the only commoner on the committee – known as the enforcers – appointed to see that the provisions of the Magna Carta were carried out. 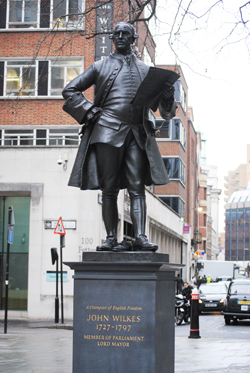 • John Wilkes: A radical, politician, journalist and notorious womaniser, he was Lord Mayor of Lord in 1774. He is noted for being the subject of what is reputedly the only cross-eyed statue in London (pictured), found at the intersection of Fetter Lane and New Fetter Lane in the City of London. It is said to be a true-to-life depiction.

• David Salomans: The first Jewish Lord Mayor of London, the banker and MP was elected in 1855. One of his tasks during his time as Lord Mayor was the removal of the inscription on The Monument which had blamed Roman Catholic conspirators for the Great Fire of London.

• Robert Fowler: The last Lord Mayor of London to have served in the office more than once, Fowler held the office in 1883 and 1885. Many others had done so previously – including the famous Richard ‘Dick’ Whittington – but none since.