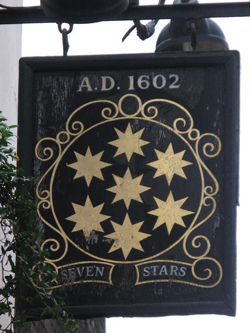 Located at 53 Carey Street in Holborn, this rather plain looking pub boasts a heritage apparently dating back to before the Great Fire of London.

Said to date from 1602, the Grade II-listed pub was apparently built as an alehouse, though the facade is 19th century as is much of the interior. Its location, just to the west of Temple Bar, meant it survived the Great Fire of London – though only just.

The name apparently relates to an appeal to Dutch sailors – it is said to have been so named in reference to the Seven United Provinces of The Netherlands (it’s also been said that the pub’s location is in the midst of an area of London in which Dutch settlers lived during the period).

It was apparently formerly known as The Log and Seven Stars or The Leg and Seven Stars, although it’s been speculated these are simply a corruption of The League and Seven Stars – a story which might make sense given the origins of the pub’s name (‘league’ referring to the union of the seven provinces).

The pub these days lies in the heart of the city’s legal community – the Royal Courts of Justice lies just to the south and Lincoln’s Inn, one of the four inns of court, to the north.

One thought on “London Pub Signs – The Seven Stars, Holborn…”