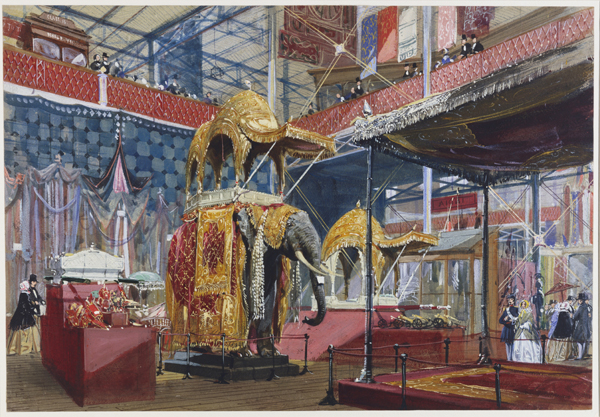 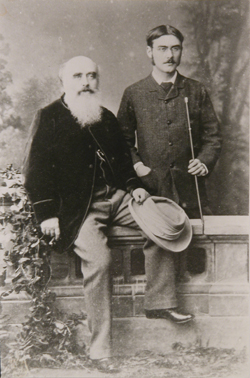 conservationist and influential figure in the Arts and Crafts movement” as well as being the father of world famous writer Rudyard Kipling – opens at the V&A in South Kensington on Saturday. The exhibition is the first exploring the life and work of Kipling (1837-1911) who campaigned for the preservation of Indian crafts as well as being a craftsman himself (his terracotta panels can still be seen on the exterior of the V&A) and an illustrator of his son’s books. Lockwood Kipling: Arts and Crafts in the Punjab and London features paintings of the Indian section of the 1851 Great Exhibition as well as objects which were on display (the exhibition was visited by Kipling while a teenager), Kipling’s sketches of Indian craftspeople observed during his many years living in India as well as objects he selected for the V&A while there, designs and illustrations for books, and furniture he helped his former student architect Bhai Ram Singh design for royal residences Bagshot Park and Osborne. The free exhibition, a collaboration between the V&A and the Bard Graduate Centre in New York, runs until 2nd April (it will be on display at the Bard Graduate Center, New York, from 15th September this year). For more, see www.vam.ac.uk/kipling. PICTURES: Top: The Great Exhibition, India no. 4, by Joseph Nash/Royal Collection Trust © Her Majesty Queen Elizabeth II 2016 ©; Right: Lockwood Kipling with his son Rudyard Kipling, 1882/© National Trust, Charles Thomas

• Anyone named Emma will receive free entry into the National Maritime Museum’s exhibition on Emma Hamilton this weekend in honour of the 202nd anniversary of her death on 15th January, 1815. Emma Hamilton: Seduction and Celebrity shines a light on the remarkable woman who overcame poverty to become one of the most famous international celebrities of her age. The display features more than 200 objects on loan from public and private collections as well as from the museum’s own collection including paintings, personal letters, prints and caricatures, costumes and jewellery. Simply bring proof that your name is Emma – such as a passport, driver’s licence or utility bill – and gain free entry on 14th and 15th January. The exhibition runs until 17th April. Admission charges usually apply. For more, see www.rmg.co.uk/emmahamilton.

• Members of the public will be granted a close-up look of the ceiling of the Painted Hall at the Old Royal Naval College in Greenwich this April. The hall, described as the “Sistine Chapel of the UK” is undergoing a two year transformation which includes conservation of Sir James Thornhill’s famous painted ceiling. As part of the project, a series of ceiling tours will be launched on 1st April this year with visitors taken up close via a lift where they can see the conservators at work. For more, see www.ornc.org.

Send all items for consideration to exploringlondon@gmail.