• Acclaimed biologist Rosalind Franklin’s grave in Willesden United Synagogue Cemetery has been given listed status, Historic England announced in marking International Women’s Day this week. Franklin’s tomb commemorates her life and achievements – they include X-ray observations she made of DNA which contributed to the discovery of its helical structure by Crick and Watson in 1953. Meanwhile, Historic England has teamed with The Royal Society to highlight the achievements of 28 remarkable women noted for their achievements in the fields of chemistry, biology, physics and astronomy. The women’s stories have been explored and key historic locations mapped. They include the Marianne North Gallery in Kew Gardens (named for 19th century botanist Marianne North), the Elizabeth Garrett Anderson Hospital – founded in 1872 as the New Hospital for Women in London by Anderson, a suffragette and the first English woman to qualify as a doctor, and the Royal Academy of Arts where natural history illustrator and painter Sarah Stone was an honorary exhibitor in the 1780s. 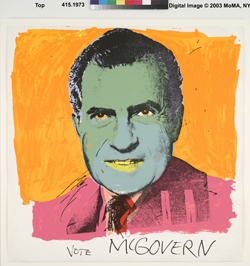 • The first major exhibition focusing on contemporary American printmaking has opened in the Sainsbury Exhibitions Gallery of The British Museum. The American Dream: pop to the present features more than 200 works from 70 artists including Andy Warhol, Jasper Johns, Robert Rauschenberg, Ed Ruscha, Chuck Close, Louise Bourgeois and Kara Walker. Including loans from institutions such as The National Gallery of Art in Washington, DC, as well the museum’s own collection, the works span six decades – from the moment when pop art arrived in the New York and West Coast scene of the early 1960s, to the rise of minimalism, conceptual art and photorealism in the 1970s, and through to the practices of today’s artists. Among the works on show are Warhol’s Marilyn, Willie Cole’s Stowage and Claes Oldenburg’s sculpture of the Three-Way Plug. Admission charges apply. Runs until 18th June. For more, see www.americandreamexhibition.org. PICTURE: Andy Warhol (1928–1987), ‘Vote McGovern’, Colour screenprint/© 2016 The Andy Warhol Foundation for the Visual Arts, Inc./Artists Rights Society (ARS), New York and DACS, London.

• Visitors with disabilities will be offered free admission to royal residences – including the Royal Mews and The Queen’s Gallery at Buckingham Palace – this weekend to mark Disabled Access Day. Visitors to the Queen’s Gallery can join verbal descriptive tours of the Portrait of the Artist exhibition on 12th March while the Royal Mews will offer free admission to disabled visitors on 10th and 11th March.  Standard access resources, including plain English tour scripts, induction loops, large-print and list access will be available across all venues. For more, see www.royalcollection.org.uk.