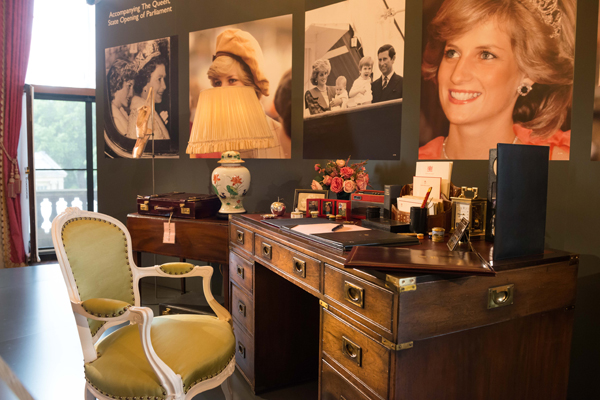 • A special tribute to Diana, Princess of Wales – who died 20 years ago this month, is included in this year’s Summer Opening of Buckingham Palace. Located in the Music Room, the display features the desk at which the Princess worked in her Kensington Palace sitting room along with selected objects, many of which have been chosen by her two sons, Prince William and Prince Harry. They include a silver Cartier calendar – a gift to the Princess from President Ronald Reagan and his wife Nancy when the Prince and Princess of Wales visited in 1985, a wooden tuck box which belonged to the then Lady Diana Spencer when she was at school, her childhood typewriter, and small round enamel boxes which were commissioned as gifts for the Princess to give to hosts on official overseas trips – among those shown are one decorated with an image of Rio’s Christ the Redeemer statue which was taken on a 1991 official visit to Brazil. Meanwhile, this Saturday, a special family festival is being held at the palace, and adjoining Royal Mews and Queen’s Gallery. Featuring drop-in arts and crafts activities, dance and drama workshops and story-telling sessions, the festival runs from 10.30am to 3pm. Entry is included in the admission price. For more on the festival, see www.royalcollection.org.uk/whatson/event/847051/Family-Festival. The summer opening of the palace, and the special exhibition on Royal Gifts, runs until 1st October. See www.royalcollection.org.uk for more. PICTURE: Royal Collection Trust/© Her Majesty Queen Elizabeth II 2017 .

• An exhibition exploring how artist Henri Matisse’s personal collection of treasured objects were both subject matter and inspiration for his work opens at the Royal Academy of Arts this Saturday. Matisse in the Studio features about 35 objects displayed alongside 65 of Matisse’s paintings, sculptures, drawings, prints and cut outs. The collection of objects includes everything from a Roman torso and African masks to Chinese porcelain and North African textiles, with most of them on loan from the Musée Matisse in Nice. The display is arranged around five thematic sections – ‘The Object as an Actor’, ‘The Nude’, ‘The Face’, ‘The Studio as Theatre’ and ‘The Language of Signs’. Runs until 12th November. Admission charge applies. For more, see www.royalacademy.org.uk.

• On Now – Plywood: Material of the Modern World. This exhibition in the V&A’s Porter Gallery celebrates that most versatile of building materials – plywood – and features more than 120 objects ranging from the fastest plan of World War II – the de Havilland Mosquito – to the downloadable, self-assembly WikiHouse. While fragments of layered board have been discovered in ancient Egyptian tombs, plywood really came into its own during the 19th century and has since been used to construct everything from an experimental elevated railway in mid-19th century New York to tea chests, hat boxes, and surfboards. Highlights include a 1908 book printed during Ernest Shackleton’s Nimrod expedition to Antarctica and bound with plywood covers, pieces by modernist designers including Alvar Aalto, Marcel Breuer, Grete Talk, Robin Day and Charles and Ray Eames, and striking examples of transport design including a 1917 moulded canoe, a 1960s British racing car with plywood chassis and some of the first ever surf and skate boards. A cluster of ice-skating shelters designed in plywood by Patkau Architects can be seen in the John Madejski Garden during the exhibition. Admission is free. Runs until 12th November. For more, see www.vam.ac.uk/plywood.

One thought on “This Week In London – Tribute to Diana, Princess of Wales; Henri Matisse and his objects; and, plywood at the V&A…”