The first prison on the site to the north of Clerkenwell Green, initially known as the Clerkenwell Bridewell or New Prison, was built in 1616 and was used as an overflow for City prisons. 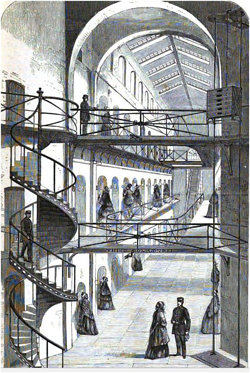 Later that century, a second prison was built next door, this time as an as a remand prison for those awaiting trial to relieve the crowded Newgate. Among those imprisoned here was the notorious Jack Sheppard and his mistress Bess Lyon (they both escaped from it in 1724).

The prison, which wasn’t located far from the Middlesex Sessions House, was significantly enlarged in 1774 and, in 1818, when the original Clerkenwell Bridewell was demolished, the New Prison was rebuilt almost entirely across both sites, providing accommodation for a couple of hundred.

Less than 30 years later, however, in the mid-1840s the still relatively new building was demolished and a new House of Detention, also known as the Middlesex House of Detention, was built in its stead. Its design was cruciform and influenced strongly by the recently completed Pentonville Prison. It had several wings for males and one for females.

The prison was eventually closed in 1877 and demolished in 1890. The Hugh Myddelton School was subsequently built on the site (the building still stands, albeit it is used as flats).

One of the most famous incidents at the prison took place on 13th December, 1867, when during an unsuccessful escape attempt, members of the Fenian Society detonated a barrel of gunpowder, causing an explosion which blew open the prison wall as well as damaging the houses which lay opposite across Corporation Row. In what became known as the “Clerkenwell Outrage”, 12 bystanders were killed and scores injured. The ringleader, Michael Barrett, was the last person to be publicly hanged at Newgate on 24th May, 1868.

The prison’s Victorian-era vaults still lie beneath the streets of Clerkenwell and a number of films including Sherlock Holmes and TV shows including Secret Diary of a Call Girl have been shot here. They can be accessed via special tours from time-to-time.