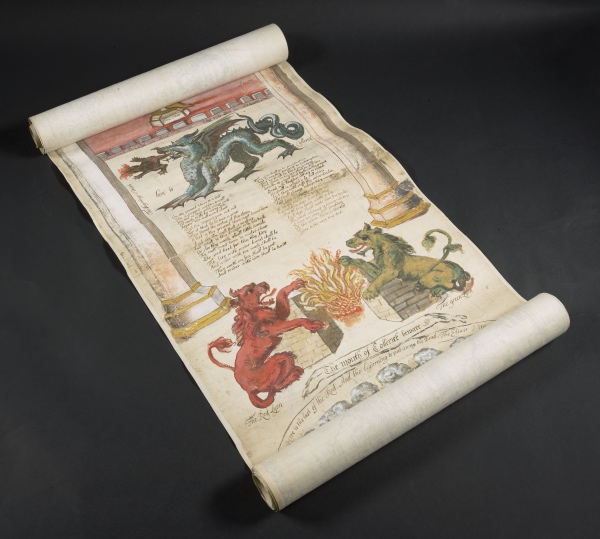 • Twenty years after the publication of JK Rowling’s Harry Potter and the Philosopher Stone, a new exhibition is opening today at the British Library featuring centuries old treasures. Harry Potter: A History of Magic features Harry Potter-related objects as well as rare books, manuscripts and ‘magic’-related objects from across the world. Highlights include original artwork for the Harry Potter books, the 16th century Ripley Scroll – a six metre long scroll which purportedly describes how to make a philosopher’s stone, Chinese ‘oracle bones’ (the oldest dateable objects in the library’s collection), a celestial globe dating from 1693 which has been brought to life using augmented reality technology, the tombstone of Nicolas Flamel (an historical figure who also features in the first Harry Potter book), and a mermaid, allegedly caught in Japan in the 18th century. Specially designed panels inspired by the exhibition have gone on display at 20 public libraries across the UK to coincide with the opening. The exhibition can be seen at the King’s Cross institution until 28th February after which it will travel to the New York Historical Society for display late next year. Admission charge applies. A series of events accompanies the display. For more, see www.bl.uk. PICTURE: The Ripley Scroll, England, 16th century © British Library Board.

• Original costumes and props from the film Paddington 2, have gone on sh0w at the Museum of London ahead of the movie’s opening next month. Behind the Scenes of PADDINGTON 2 provides a close-up look at the film with highlights including a Paddington outfit, the London pop-up book that Paddington is trying to buy for his Aunt Lucy’s 100th birthday, and costume designer sketches. The display is accompanied by a series of events for half-term which include the chance to meet Paddington, some of the actors from the film and children’s author Katherine Woodfine as well as a talk and book reading with Michael Bond’s daughter, Karen Jankel. There’s also a chance to win four tickets to the world premiere of the film which opens on 10th November. The free display can be seen until 19th December. For more, see www.museumoflondon.org.uk/paddington.

• A new display exploring how money works and what it looks like under communism has opened at the British Museum. Drawing on the museum’s extensive collections, The currency of communism features a series of posters advertising financial products along with other objects – including a medal commemorating the fall of the Berlin Wall – which explore concepts behind money in communist societies around the world, both historically and in the present day. The display has been made possible through an Art Fund grant which has enabled the museum’s curator of modern money, Thomas Hockenhull, to build a collection of numismatic material from socialist and socialist governed countries, some of which will be seen here. On view on Room 69a, the display can be seen until 18th March. For more, see www.britishmuseum.org.