Pontack’s was a City of London eating house specialising in French cuisine that took its name from owner Pontack. 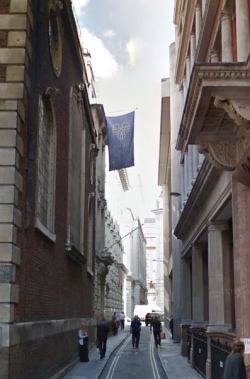 Pontack (his Christian name is apparently unknown) was said by some to have been the son of the president of the Parliament of Bordeaux, Arnaud de Pontac although this claim has been disputed by Brian Cowen, writing in the Oxford Dictionary of National Biography.

Regardless, Pontack used a portrait of Arnaud as his sign and as a result, the establishment – which he opened on the former site of the White Bear Tavern at 16-17 Lombard Street after the Great Fire of 1666 – was popularly known as “Pontack’s Head”.

Cowen records that Pontack’s was relocated to the east side of Abchurch Lane in 1688-90 (his old premises were occupied by Edward Lloyd, founder of the famous Lloyd’s Coffee House).

The eating house was favourite of the elite, patronised by everyone from Jonathan Swift to Sir Christopher Wren and John Evelyn and was the location of the Royal Society’s annual dinners following its relocation until 1746 (when the society moved the dinners to the Devil Tavern).