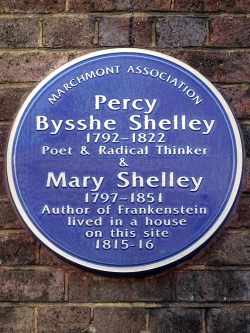 Following their return to England in September 1814 after their European elopement (they were forced to return due to a lack of funds), Mary Shelley and her lover Percy Bysshe Shelley lived in a couple of London properties including one on this site at 87 Marchmont Street in Somers Town.

The couple lived in the Marchmont Street premises, not far from where Shelley had grown up, from 1815-16 with Mary’s step-sister (and possibly by this time Percy’s lover) Claire Clairmont. The landlady’s name was apparently a Mrs Harbottle.

In January of the second year they were in the lodgings, their son William “Willmouse” was born.

The group left the property in May, 1816, to join with Lord Byron in Lake Geneva. It was on this trip that Shelley started writing her famous book Frankenstein: or, The Modern Prometheus.

A blue plaque was placed upon the property 2009 by a residents and business group known as the Marchmont Association.

Correction: This article originally said Mary Shelley wrote Frankenstein on the trip to Lake Geneva. She actually started writing it as a short story there but it was completed over a longer period which extended into 1817 (with publication initially in 1818).