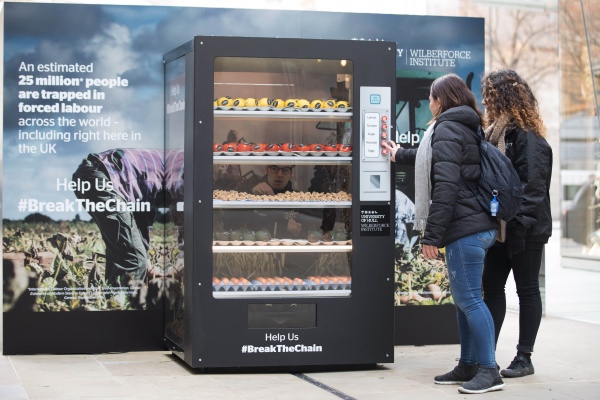 A “human vending machine” appeared near St Paul’s Cathedral in central London on Monday – Human Rights Day – as part of an initiative to highlight the plight of the estimated 25 million people trapped in forced labour around the world. An initiative of the University of Hull’s Wilberforce Institute, the machine, which was only present for the day, was stocked with everyday food items to illustrate that fruit, vegetables, meat, fish and cheese bought in the UK are at high risk of being supplied, at some point in the chain, by forced labour. To be seen the university’s campus in Hull on Thursday, the ‘human vending machine’ is part of the “It’s Time to Break the Chain” campaign which the institute has launched to “galvanise consumer power and influence companies to combat slavery practices in supply chains across all sectors”. For more on how you can help “break the chain”, see www.hull.ac.uk/special/hidden-human-cost.aspx. PICTURE: David Parry/PA Wire (Courtesy University of Hull).