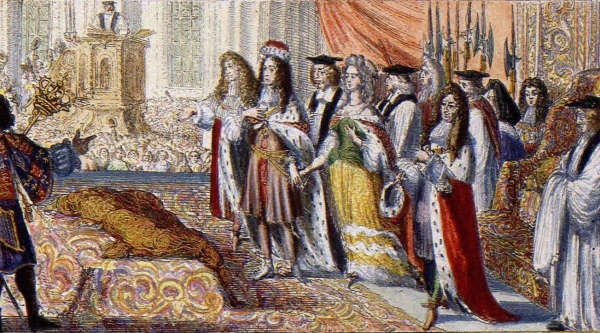 This month (we’ve just managed to sneak it in) marks the 330th anniversary of the coronation of joint sovereigns, King William III and Queen Mary II – the first and only time such a coronation has ever happened in England.

The two were crowned in a joint – and glittering – ceremony at Westminster Abbey on 11th April, 1689, following what was known as the “Glorious Revolution” in which they assumed the monarchy after Mary’s father, King James, II fled to the continent following William’s invasion in late 1688.

At the coronation, King William took the abbey’s famous Coronation Chair while a second seat was brought in for the Queen.

William also used the coronation regalia which had been created for King Charles II in 1661 but Mary, a monarch in her own right, needed a new set. Given the time constraints (the ceremony was to take place as soon as possible given the uncertain political climate), she ended up using the repurposed regalia created for her step-mother, second wife and consort of King James II, Mary of Modena, as well as some newly created pieces.

Controversially, the ceremony was presided over by the Bishop of London, Henry Compton, after William Sancroft, Archbishop of Canterbury – his title meant he would usually undertake such a task, refused to be involved thanks to his support of the now deposed King James II.

Earlier that day, the King and Queen had travelled separately from Whitehall to Westminster – him by barge and she by chair – and after being taken into Westminster Hall, processed, surrounded by dignitaries and to the sound of trumpets, to Westminster Abbey where the ceremony took place.

After the coronation, the newly crowned Sovereigns returned to Westminster Hall where a lavish banquet was held.

PICTURE: William III and Mary II  in part of an image by Dutch printmaker Romeyn de Hooghe (c1690) (via Wikipedia)