We return to the series we mistakenly started earlier this year. Here’s a recap of the first story with a new article to come next week…

This private garden square in Marylebone was first laid out from the 1760s to 1780s by Henry William Portman and forms part of the expansive Portman Estate.

The 2.5 acre garden square, which is for use by residents only, features London plane trees, a lawn and informal plantings as well as a children’s play area and tennis court.

The current configuration was created in the early 1900s – the railings, which were originally installed in the 1880s, were removed as part of the war effort in 1942 but restored in 1972.

Significant buildings once located on the square include the James “Athenian” Stuart-designed Montagu House, built for Elizabeth Montagu between 1777-1782. Located on the north-west corner, it was destroyed during World War II and the Radisson Blu Edwardian Hotel now stands on the site. 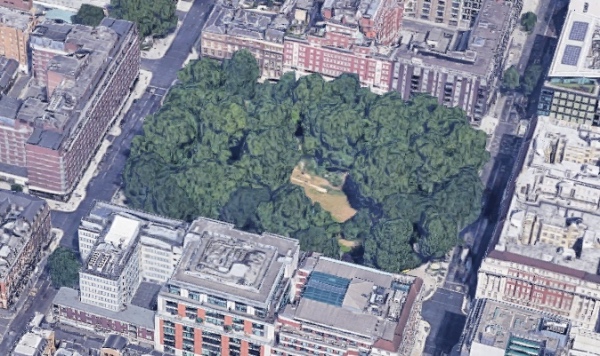