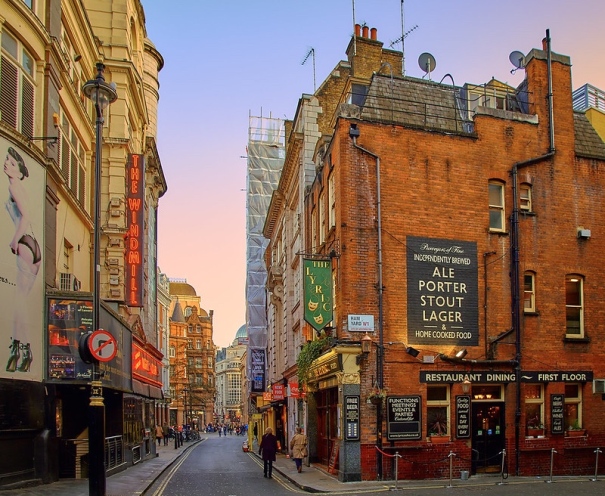 This West End thoroughfare obviously, now associated with London’s nightlife, owes its name to a windmill which once stood in the vicinity.

The windmill stood for at least 100 years before it was demolished in the late 17th or early 18th century – the rural land on which it stood was known as Windmill fields.

As the area now known as Soho was developed, the street, which runs between Brewer Street and Coventry Street (albeit split into two sections by Shaftesbury Avenue), was gradually constructed and by the early 1680s both sides of it had been developed.

Famous residents include the Scottish anatomist and physician William Hunter, who, built a large house at number 16 in 1767 which featured an anatomical theatre, dissecting rooms, library and museum. It now forms part of the Lyric Theatre and is recognised with an English Heritage Blue Plaque.

An upstairs room in the former Red Lion pub, located on the corner with Archer Street, is famous for being where Karl Marx and Frederick Engels were asked to write a program of action for the Communist League, published in 1848 as The Communist Manifesto.

Meanwhile, the former Windmill Theatre, which first opened in the 1930s and famously “never closed” during the Blitz, was known for its “Windmill Girls” in which nude girls posed motionless in what were known as “tableaux vivants”, has long been associated with risqué entertainment. The establishment was owned by Laura Henderson, the subject of the 2005 film starring Dame Judi Dench, Mrs Henderson Presents.

The street is also home to the Trocadero complex, originally built in 1896 as a restaurant by J Lyons and Co – of Lyon’s Corner Houses fame – to cater for theatre crowds on the site of what had been the Argyll Assembly Rooms, an establishment which become notorious as a meeting place for prostitutes and their customers. The Trocadero was redeveloped in the 1980s into a shopping and entertainment complex. There are now plans to build a hotel on the site.

Other landmarks include the Soho Parish School – the only school in Soho – which, located at number 23, traces its origins back to 1699 as well as St James Tavern, said to be built in the late 1890s on the site of an earlier tavern, The Catherine Wheel.

View down Great Windmill Street with The Lyric pub on the right and the former Windmill Theatre on the left (Pedro Szekely/licensed under CC BY-SA 2.0)