Born in Warwickshire on 22nd November, 1819, Evans was the third child of Robert Evans, an estate manager, and Christiana Evans, daughter of a local mill owner.

Described as a “voracious reader” from an early age, she was a boarder at various schools up until the age of 16 when, following the death of her mother, she returned home to act as housekeeper (she apparently continued her education in the library of Arbury Hall, the property her father managed).

In 1841, when her brother Isaac married and took over the family home, she moved with her father to Foleshill near Coventry. There, they met Charles and Cara Bray – Charles was a wealthy ribbon maker and religious free-thinker who used his wealth to establish schools and hospitals to help improve conditions of the poor.

Thanks to her friendship with the Brays, Evans came into contact at their house, Rosehill, with the likes of Welsh social reformer Robert Owen, Harriet Martineau, often described as the first female sociologist, and American essayist Ralph Waldo Emerson as well as German theologian David Friedrich Strauss and German philosopher Ludwig Feuerbach (in fact, her first major literary work was the completion of an English translation of Strauss’ The Life of Jesus Critically Examined and she also later translated Feuerbach’s The Essence of Christianity).

Evans, who was a devout evangelical Christian in her youth, lived with her father until his death in 1849. She had questioned her faith some years before but after she’d informed her father she would no longer go to church, they had reached a compromise under which she had been free to think as she wished as long as she continued to attend church.

Following her father’s death, Evans – now 30 – had visited Switzerland and, following her return to England, moved to London to pursue a career in writing.

In London, Evans initially stayed in the Strand home of radical publisher John Chapman, whom she’d met through the Brays. She eventually went on staff at his left-wing journal, The Westminster Review – becoming, in time, Chapman’s right-hand, the editor in fact if not in title, at publication by the time she left in 1854.

At that time she moved in with journalist George Henry Lewes, who had met her several years earlier. He was still married to Agnes Jervis, despite her having born to children to another man, and the new couple’s relationship caused a great scandal, leading many to shun Evans. The couple travelled together to Germany for research and thereafter Lewes and Evans apparently considered themselves married.

While she had stories published in magazines in the years earlier, her first novel, Adam Bede, was published under the pseudonym George Eliot in 1859 (she’d first used the pseudonym on a short story, The Sad Fortunes of the Reverend Amos Barton, published in 1857). Much acclaimed, the public interest surrounding the novel led Evans – who now called herself Marian Evans Lewes – to acknowledge the work as hers – a revelation which came as a shock to many given her unconventional private life but which, despite that, failed to dent the novel’s popularity.

Encouraged by Lewes, she wrote several novels over the next 15 years including The Mill on the Floss in 1860, Silas Marner in 1861, Romola in 1863, Felix Holt, the Radical in 1866 and her most acclaimed novel (sometimes described as the greatest English novel ever written), Middlemarch in 1871-72. Her final novel, Daniel Deronda, was published in 1876.

Celebrated for the depth of her characterisations and her descriptions of English rural life, she was recognised as the greatest English novelist of her time. 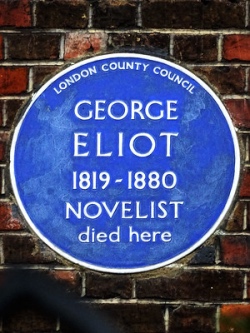 The couple, meanwhile, lived in several properties in London – including one in Richmond, ‘Holly Lodge’ in Wimbledon Park Road, Wandsworth (it was the first property south of the Thames to be marked with an English Heritage Blue Plaque), and ‘The Priory’ near Regent’s Park in Marylebone.

Eliot’s success as a novelist saw the couple gradually gain social acceptance – in an indication that can be seen in that Charles Darwin, Aldous Huxley, Henry James and Frederic Leighton were all among those entertained at The Priory in the couple’s latter years together.

Lewes died in 1878 and two years later, on 16th May, 1880, Lewes married John Cross – a longstanding friend who was 20 years younger and who had provided comfort following the loss of her husband.

Following their honeymoon in Venice, the couple returned to London where they lived at a property in Cheyne Walk, Chelsea (an English Heritage Blue Plaque marks the property).

It was to be a short-lived marriage – soon after moving into their new home, Mary Ann (now) Cross fell ill with a throat infection and coupled with the kidney disease she had suffered for several years, she died on 22nd December of that year at age 61.

Eliot was buried in Highgate Cemetery beside Lewes. A memorial stone was erected in Westminster Abbey’s Poet’s Corner in 1980.