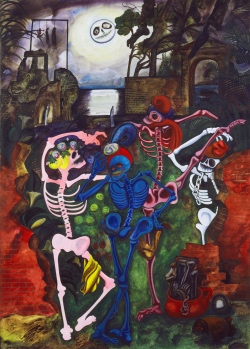 • An exhibition which traces the history of surrealist art in Britain has opened at the Dulwich Picture Gallery. Featuring more than 70 works, British Surrealism marks the official centenary of surrealism – which dates from when founder André Breton began his experiments in surrealist writing in 1920 – and features paintings, sculpture, photography, etchings and prints. Among the 40 artists represented are Leonora Carrington, Edward Burra, Francis Bacon, Lucian Freud, Ithell Colquhoun, John Armstrong, Paul Nash and Reuben Mednikoff as well as lesser known but innovative artists like Marion Adnams, John Banting, Sam Haile, Conroy Maddox and Grace Pailthorpe. Highlights include Armstrong’s Heaviness of Sleep (1938), Burra’s Dancing Skeletons (1934), Adnams’ Aftermath (1946), Nash’s We Are Making a New World (1918), Colquhoun’s The Pine Family (1940), Pailthorpe’s Abstract with Eye and Breast (1938) and Bacon’s Figures in Garden (c1935). Also featured are works and books by some of the so-called ‘ancestors of surrealism’ including a notebook containing Coleridge’s 1806 draft of poem The Rime of the Ancient Mariner, and a playscript for Horace Walpole’s The Castle of Otranto (1859). Admission charge applies. Runs until 7th May. For more, see www.dulwichpicturegallery.org.uk. PICTURE: Edward Burra, Dancing Skeletons,1934, (1905-1976). Photo © Tate

• The Prince of Wales’ investiture coronet has gone on show in the Jewel House at the Tower of London for the first time. Made of 24 carat Welsh gold and platinum and set with diamonds and emeralds with a purple velvet and ermine cap of estate, the coronet – which was designed by architect and goldsmith Louis Osman – features four crosses patee, four fleurs-de-lys and an orb engraved with the Prince of Wales’ insignia. The coronet was presented to Queen Elizabeth II by the Goldsmiths’ Company for the Prince of Wales’ investiture at Caernarfon Castle on 1st July, 1969. It’s being displayed alongside two other coronets made for previous Princes of Wales as well as the ceremonial rod used in the 1969 investiture which, designed by Welsh sculptor Sir William Goscombe John (1860-1952), is made of gold and is decorated with the Prince of Wales’ feathers and motto Ich Dien. For more, see www.hrp.org.uk/tower-of-london/.

• The first major exhibition devoted to David Hockney’s drawings in more than 20 years opens at the National Portrait Gallery today. David Hockney: Drawing from Life features more than 150 works with a focus on self portraits and his depictions of a small group of sitters including muse Celia Birtwell, his mother, Laura Hockney, and friends, curator Gregory Evans and master printer Maurice Payne. Previously unseen works on show include working drawings for Hockney’s pivotal A Rake’s Progress etching suite (1961-63) – inspired by the identically named series of prints by William Hogarth, and sketchbooks from Hockney’s art school days in Bradford in the 1950s. Other highlights include a series of new portraits, coloured pencil drawings created in Paris in the early 1970s, composite Polaroid portraits from the 1980s, and a selection of drawings from the 1980s when the artist created a self-portrait every day over a period of two months. Runs until 28th June. Admission charge applies. For more, see www.npg.org.uk.

Send all items to exploringlondon@gmail.com.