Dating from 1700, this celestial globe was made by Thomas Tuttell, hydrographer and mathematical Instrument maker to King William III in the year 1700. 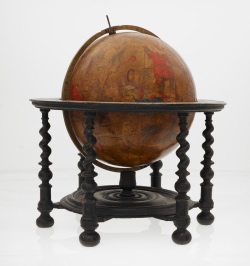 The globe, a unique survivor of its age, is identical to a celestial globe made by Joseph Moxon in 1653, except for one additional constellation in the northern hemisphere named the ‘Cor Caroli’ (Heart of Charles), a reference to King Charles I (the constellation was named by Sir Charles Scarborough to commemorate the restoration of the monarchy in 1660 and it was ﬁrst published on a star map in 1673).

It is one of 10 historic globes which have been made available for close-up inspection, including using an augmented reality tool which allows you to spin and zoom in at will, on the British Library’s website.

The 10 are the first tranche of globes to go online in a project involving British Library staff and digitisation company Cyreal that will eventually involve 30 globes.

Others among the first 10 include what is possibly the earliest miniature ‘pocket’ globe – dating from 1679, it was made by Joseph Moxon, two globes made by Willem Janszoon Blaeu – a terrestrial globe and a small table star globe – which date from 1606, and Johann Doppelmayr’s terrestrial and star globes from 1728.

The globes, which are part of the library’s map collection, can be found at www.bl.uk/maps/articles/european-globes-of-the-17th-and-18th-centuries.