The future of the Kingdom – which legend says will fall should the resident ravens leave the Tower of London – seems secure for now. Three new raven chicks have been born since the country went into lockdown, securing their presence at the Tower for years to come.

The offspring of Huginn and Muninn, who were named after the ravens of the Norse God Odin, the chicks have yet to be named. Born in secrecy, they spent the first couple of weeks with their parents but are now under the care of the Tower’s Ravenmaster, Yeoman Warder Chris Skaife.

The Tower is usually home to six ravens but with eight ravens already in residence, the new chicks will apparently be moving on from the Tower to live with raven breeders in the country, ensuring the future of the Tower ravens bloodline.

They’re not the first chicks to be hatched by Huginn and Muninn – they’re already the parents of Poppy, named for the Tower’s famous 2014 display commemorating the centenary of World War I, and George, who was born on St George’s day at the Tower last year.

The tradition surrounding the special place of the ravens at the Tower is generally attributed to King Charles II following a warning he received that the Kingdom and Crown would fall should they leave.

PICTURES: Top – One of the new chicks; Below – Ravenmaster Chris Skate attends to the birds (© Historic Royal Palaces) 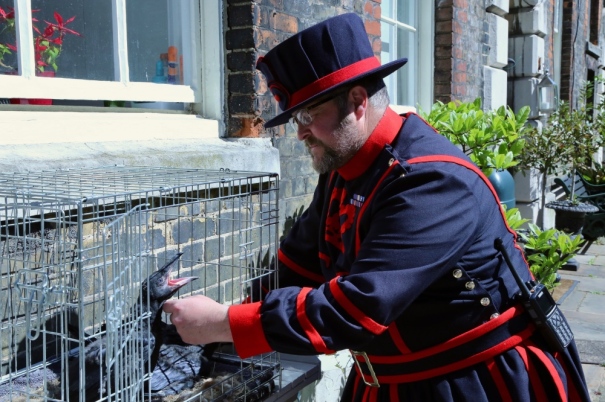