Thomas Hodgkin was a physician, pathologist and reformer whose name is now associated with Hodgkin lymphoma, a malignant disease of lymph tissue. 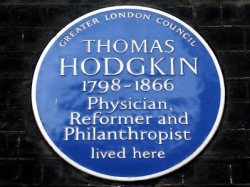 Born in Pentonville in what is now central London, Hodgkin (1798-1866), who trained at St Thomas’s and Guy’s Medical School and the University of Edinburgh, went on to work at Guy’s – where he built up a reputation as a pathologist – and later heading teaching staff at St Thomas’s (after it had split from Guy’s).

He first described the disease that bears his name in a paper in 1832 but it wasn’t until 33 years later, thanks to the rediscovery of the disease by Samuel Wilks, that it was named for him.

A Quaker, Hodgkin was also involved in the movement to abolish slavery and also raised concerns about the impact of the West on Indigenous culture. He died while on a trip to Palestine in 1866 and is buried in Jaffa.

Hodgkin is commemorated with an English Heritage Blue Plaque on his former home at 35 Bedford Square in Bloomsbury. Interestingly the house also bears a plaque to another giant of the medical field – Thomas Wakley, the founder of The Lancet.

The plaque commemorating Hodgkin was erected by the Greater London Council in 1985.

One thought on “10 disease-related memorials in London…10. Thomas Hodgkin…”